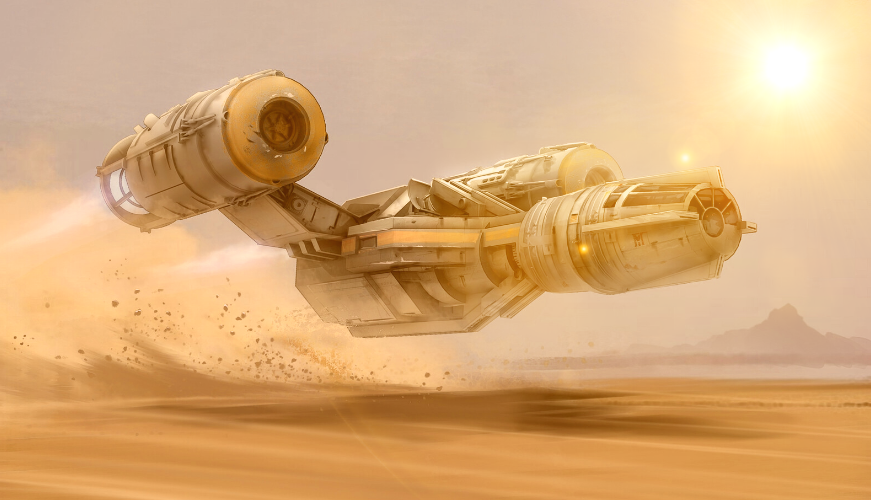 SPEED/MANEUVERABILITY
The Quad-Five express courier has a top speed of 80 MGLT and has decent excellent maneuvering characteristics.


DESCRIPTION​
Byron has always tinkered with items and found a fascination with technology. As a hobby he worked on fixing up the Scarab. Originally he thought of calling it 'Dung Beetle' ironically but figured when it came time to licensing the ship and specifications he should put something more appropriate. The plan was to fix it up, maybe impress some gal but mostly to just have the freedom to come and go when he wanted.

Before Byron could take the ship on his first vacation he used it to help get a Jedi back to Ajan Kloss. From that point on he had begun on the path of a Jedi. With his former life behind him he has since made a few modifications. Normal work and an ordinary life has made him continue to hold onto what remains of the small comforts. Working on his ship and staying in control of what it can do was a quick way for him to relate to the meditation and the calming of his mind.

The Scarab is a modified Quad Five Express Courier with parts from probably dozens of different ships. Only sixty percent of it is probably the original parts and that is being generous. The man prefers a ship without offensive weapons despite what some other people say. He keeps onboard a portable computer, yellowbox, welding putty and a backup for all his normal equipment. His astromech co-pilot/assistant BG-L0 or "Big-Low" usually sticks with the ship whenever he goes anywhere.


LEGALITY​
Legal. Star skiffs such as the Quad-Five are considered innocuous enough under most jurisdictions, and are not restricted in most systems.


INTENT​
To create the home made ship for my new character to use.