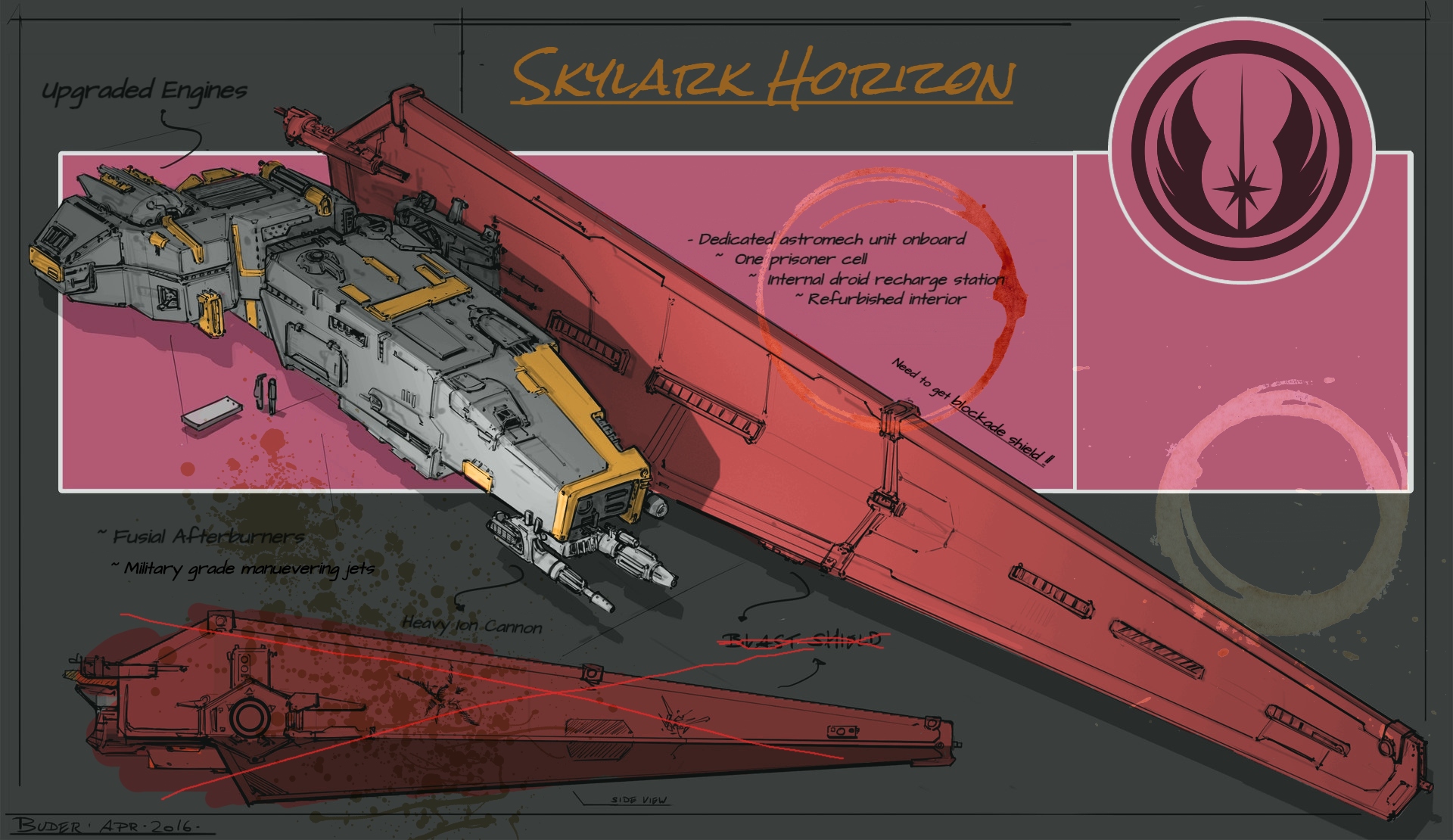 "Yeah, she's seen some wear and tear and is missing the Blockade Shield but I think...I think I might be in love...." - Byron Ryker upon seeing the Skylark Horizon for the first time​
Byron is an engineer by trade and before becoming a Padawan he worked for the Contruum Ship Yards. For a long time he didn't need any ship other than The Scarab. But the man ended up crashing the light freighter and sold the scrap to help pay for a new ship. The purchase was the Glaive class blastboat he renamed to the Skylark Horizon along with getting a new paint job too. The proper licensing was additionally purchased though Byron is well aware he might still get some hails from planetary defense forces when first entering a system.

With his trusty astromech, BG-L0, they have begun making improvements and tweaking the ship to fit Byron's personal tastes. Separately purchased was class A cargo container. Byron insisted that being able to haul supplies to people was just an option he wanted available even if it decreased she ship's performance. Plus he has used to to practice maneuvering with a shield using the bulkiness to substitute and provide a realistic handicap for maneuvers.

Some of the aftermarket additions that Byron has made is adding a fusial afterburner and military grade maneuvering jets. Despite the fearsome armament of the blastboat, Byron prizes the breakaway speed capabilities and maneuvering capabilities for a ship of its class. The limitations of the ship's original design is what actually made him appreciate it more than anything else. Onboard there is a portable computer, yellowbox, of course plenty of welding putty. Byron has recently acquired a medical assistant droid in an attempt to take the initiative but also has some skepticism to see if even makes sense to keep the droid onboard. A training remote is onboard which Byron uses to both test his lightsaber skills but also marksmanship (with stun bolts of course) on journeys between systems or during stops on remote outer rim worlds. Like the medical droid, a GNK power droid was added to the ship's standard compliment though it is often kept inert since it its incesant 'gonking' has bothered its owner after awhile. Sometimes he uses it to test his concentration limitations but so far it has found a way to thwart Byron's attempts. Finally, a EK4 labor droid is kept in the cargo containers in the event there is some particularly heavy freight that is needed for the loading.

LEGALITY​
Heavily regulated. These ships are either associated with criminal elements or highly regulated military organizations. For this reason they are heavily regulated in civilized sectors of space. (proper documentation of this specific vessel has been acquired)


INTENT​
This is the personal transport of Byron Ryker. original writeup.


RESTRICTIONS​
Rare compared to even other blastboats this ship and associated 'shield' are hard to come by. The ship itself can be acquired still though finding a ship with an intact blockade shield or going through the work to acquire one requires a plot.

This ship does not currently have a shield.