THEME​
Jedi Padawans were known for being students of the Force yet unlike Jedi Knights they still had much to learn. Byron was well aware of his ignorance but was getting an idea of what direction to take. The Skylark Horizon was a blast boat and not the best at carrying large quantities of cargo like freighters. So for this job the Jedi Order allowed him and a few other volunteer padawans to go on their own trip to the temple on Yavin 4. A YT-1300 owned by the Jedi Order was stocked full of supplies after they left Ajan Kloss and Byron was tasked with piloting the ship and returning it afterwards.

"Well it's in decent condition but...we need to think about getting better hangars on Ajan Kloss." He said mostly to himself as the light freighter flew over the lush landscape of the jungle moon. BG-L0, aka "Big Low" just beeped and rolled to a different portion of the light freighter to check on something.

Ahead, the Jedi Temple jutted out of the canopy. Already, just by being in the planet's atmosphere he felt like there was a wealth of life to the world though its identity was totally different from Ajan Kloss. Soon enough the ship would come to land in one of the hangar bays of the Temple. It was a step up from Ajan Kloss in Byron's opinion. Some ships were still tarpped and left out to the elements. Droids and various Order personnel moved about their daily activities. Some watched the newest ship arrive. The ship was guided slowly into a side spot where the cargo could be unloaded without being in the way of other arriving or departing vessels.

Powering down the ship, he guided the binary loader droid in the hangar and made sure to check in properly. The air was different on the planet. A unique ecosystem yet also still similar to the jungle of Ajan Kloss. He took a deep breath and puffed his cheeks for a moment as he realized he was the responsible one for the time being. It was his first time at this temple but from an engineering standpoint he could tell the structure was sturdy if not lacking in some maintenance. With the supplies they brought they were one step closer to restoring the temple to a better state. 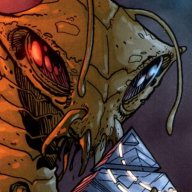 Izel was grateful for the opportunity to work with Padawan Ryker again, they really hadn't had the time for a proper introduction on Tol Amm. Then they had been too busy trying not to get eaten alive, but the initiate had proven himself to be quite capable in her eyes. They were only supposed to be delivering cargo this time, so hopefully things would be much more easygoing. Of course, things had gone wrong for her on simple missions before, so the Vratix was never really sure what to expect when leaving Ajan Kloss anymore. She was coming to the conclusion that either she was a magnet for trouble or the Jedi as a whole were.

Seeing the Great Temple come into view immediately caught the Padawan's undivided attention. From her studies it was quite the fascinating place, and had exchanged hands several times throughout it's history. In fact this was not even it's first time being occupied by the Jedi. It was part of why she volunteered for this simple transport mission in the first place, in order to get a chance to explore the ancient structure. As they landed and stepped off the ship Izel was greeted by the pleasant atmosphere of the sparsely populated world. She always liked visiting places largely untouched by civilization. Too many planets in the galaxy were cramped and overpopulated.

She quickly got caught up looking around the hangar, taking great interest in examining every detail of the old temple around them. "Well.. this is nice..." She said a bit awkwardly before looking back to Byron. "Are we supposed to... Help them unload or something? I don't believe I've been on a supply run before." It wasn't very hard to tell the Vratix was much more interested in exploring the temple then doing anything they had actually been sent here to do.

Fiach was possibly considered a well-seasoned Padawan – but she was a Padawan none the less. She had been working through her trials and was therefore on the journey to becoming a Knight – but she believed a Jedi learned every day, regardless of rank or status.

As they approached the jungle moon, Fiach took the opportunity to stow her Jedi cloak. If Ajan Kloss was humid, their current destination was more like an outdoor sauna. As they skimmed the trees, Fiach saw the Temple peeking out from the canopy and a smile formed on her lips. New experiences equated to education in Fiach’s eyes and she adored learning.

No sooner had they landed than they were surrounded by ground crew and droids that ensured they were guided to the right spot and then unloaded their cargo with impressive efficiency.

She’d studied the Temple from records she’d been able to access and wondered if the restoration would be sympathetic to its heritage or be more pragmatic and simply ensure it was safe and habitable. The latter would require less time and resource – but Fiach had a soft-spot for the ‘old days’ and hoped it could at least externally keep the façade of a bygone era.