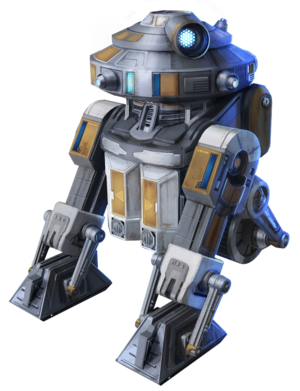 
DESCRIPTION​
The T7 was an astromech droid series produced by Duwani Mechanical Products. The T7s design is over 3,500 years old making this droid a relic of a bygone age. Whilst the relatively more recent R2-Series astromech droid is commonplace in the galaxy despite it's age, T7s are practically extinct by comparison. Although in their time there would have been an abundance of T7s due to their durability, modifiable design and excellent capabilities, to find one in original working condition would be next to impossible. If they have not been scrapped and used for parts, the T7s would have been decommissioned and replaced by newer astromech models as the centuries rolled on. There is some likelihood however that some disused T7s may still exist, though after three millennia, they would need to be renovated and reprogrammed in order to work again.

T7s have a box-shaped body which seats an almost conical head and a tripod leg arrangement, though the trailing leg is supported by a large rolling wheel. Movement is provided by wheels in each leg which can be magnetised to adhere to metallic surfaces. They are equipped with an array of tools and sensors to aid in their assigned duties and are more than capable of handling most tasks. T7s can communicate with and run diagnostics on various computer systems, as well as conducting physical repairs on starships and other machines. These droids stand just over a meter tall, putting them at an advantage over larger astromech droids when it comes to storage.

As with most astromechs, the T7 can be used as a navicomputer aboard hyperdrive-equipped starships. In it's heyday, starfighters would have been commonly equipped with astromech sockets enabling a T7 to act as a navigation system, though this practice declined over time and it was not until the R2 series astromech surfaced many years later that it began to be commonplace again. These days it is unlikely a T7 would be able to interface with a modern astromech socket due to differences in size and outdated technology.

Though they were not factory-issue, combat upgrades such as flamethrowers and EMP generators were made available for the T7-series. These were manufactured on Nar Shaddaa and considered by some to be of the finest quality available. These types of modifications set the droid apart from most other astromech droids which, for the most part, are devoid of combat features in order to meet legal requirements. Some owners also equipped their T7 droids with shield generators enabling it to protect itself in combat situations or thruster jets which enabled them to traverse difficult terrain. Anybody coming into possession of a T7 in the present day would be able to customise their droid with similar modifications should the want - or need - arise.

T7s cannot speak organic languages and communicate in droidspeak or through text when connected to external networks and vehicles. Their personalities vary wildly depending on how they have been restored, though originally they would have been flexible and outgoing, much like R2 droids.


LEGALITY​
Legal. Astromech droids such as the T7 series are permitted in most regions of the Galaxy. However, those modified with combat upgrades would be considered illegal and are restricted under interstellar law, as is the case with most combat droids - particularly those that are privately owned. Owners of customised T7s may be able to get around these restrictions under the guise that their droid is simply a standard-issue astromech.


INTENT​
To create an archaic astromech droid and introduce a known astromech series to the site canon.

Before I get stuck into this, I just want it known that I like the T7 series, and that you've taken the time to write it up.

There are some problems here, starting with the lore you've included. Knights of the Old Republic, though a fantastic series, is no longer considered canon, as are the events and characters therein. Unless Disney says otherwise, the Great Galactic War never happened in the current official canon. As such, I would appreciate it if you removed specific references to it in the write-up.

In its place, to indicate age, I might substitute something like "in the millennia prior to the Ruusan Reformations," which is still a canon event. Be as vague as you can about stuff in deep Galactic history.

The other problem I see is some of the equipment. While I can buy that combat upgrades for astromechs would be a thing, I seriously doubt they would exist in all T7s, even after a few thousand years. As such, I would appreciate if you removed the shield generator, EMP generator, thruster jets and flamethrower. If you wanted to add these to a specific droid, I would write them up and submit them separately as droid upgrades.

Thanks for reviewing the submission. I've now edited the write-up to align with your notes. In particular, I've removed the equipment highlighted from the list but re-written a paragraph in the description to highlight the modification potential of a T7 astromech and how it may have been used in the past.