Bretharr was in a cantina, having a long overdue rest from service on the frontlines after another operation. It felt like he had been fighting for... Months. He probably had been, and was just going mad. But now he was relaxing in a bar on one of the higher levels of Coruscant, a popular haven for service men and women. He hoped to see his CO, as he wanted a little talk with him. Just a few words of thanks etc. He hoped to see others as well, but for now, he was taking sips out of this very sweet cocktail he had just purchased, made of fruit and other alcohol. He would also be watching the sport on the TV, but not paying much attention.
​
@Minuteman75
(No Hutt characters, death disabled, injury disabled, no shenanigans)
Last edited: Nov 20, 2018 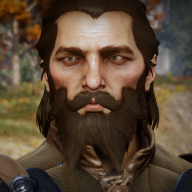 Well if there is a one thing that remain constant in Talos’ life it was the love of alcohol. He wasn’t a saint by any means but the spaceborn made sure to only drink when combat is not happening. Walking into the establishment, in his blue off duty uniform, the bearded officer glanced, looking for someone. Specifically one of his marines Bretharr Bargall.

It sounded like he wanted to tell me something judging by the message he left. Must be important. Soon enough he spotted Bretharr and walk over to him despite the crowded surroundings. Talos stopped a few feet away and said. “You seem to be enjoying yourselves Bargall.”

As Bretharr heard the officer speak to him, he turned round after putting the drink down and stood to attention saluting
“Sir! I merely wanted to enjoy the fruits of life sir before life bit us in the arse sir!” Bretharr realised that Talos probably didn’t want so much attention put on him, and so he eased back down again, before sitting on his stool, pulling out another one for the Lieutenant.
“Please, sit sir.” He said
“Do you want a drink?”

Talos Barrenfist returned the salute while hoping the patrons around them don’t notice them. It’s not like he was ashamed of his military service but Talos was getting increasingly annoyed with the hero worship. So he welcomed the chance to sit down when Bargall offered a chair. When asked he nodded and replied.

“Whiskey would be fine.”
B

Bretharr would take another sip of his fruity cocktail as Talos sat down before preparing his little... Speech. He had been meaning to say this for a long time, but never got the chance. Now he could
“I haven’t really thanked you sir for everything. When I got demoted I thought that was that. My career, my reputation, everything would go down the toilet. When I heard I was assigned to you, I couldn’t help but shake this feeling that you might exploit the irony that you were now commanding me, after I had commanded you before. But under your command, I haven’t experienced any of that. I haven’t experienced a greater enjoyment in the military before. And so I feel like I owe everything to you. So thanks sir. For everything.” He said with a tone of sincerity and emotion. Remembering the dark days of the Inquiry, and all the troubles of command, the military seemed like a strain. But now, life with the others had made him seem... Free. Happy. The comradeship between brothers were... Something he hasn’t felt when he was a Lieutenant. Maybe the demotion hadn’t been such a bad thing after all...

The Deculian had a feeling this topic would be brought up eventually. Yet the life and death struggles of war has a way of holding off such conversations. As he sat in the chair waiting for his own beverage, Talos took in the words that have been said. It was true Bargall had been a lieutenant sometime before while he himself had been only a lowly sergeant. Life’s fortunes can reseverse when one least suspects it.

At last the bartender, a heavyset Gran wearing a black dress passed the glass to him. Briefly nodding appreciation to the three eyed alien who went to serve another customer Lt. Barrenfist turned toward to the other solider.

“Tell you the truth Bargall, I didn’t know what to think of ya at first when we first met. You seemed like one of those fancy officers that I keep appeased while doing my duty.”

Even as the music in the background Talos took a snip of the whisky that burned his throat. Seconds later he continued.

“The reason why I never took advantage of you is because I been to plenty of low places in my life as well. I figured you deserved at least a second chance if nothing else. Don’t get me wrong if you had acted incompetent or insubordinate in my unit there would’ve been hell to pay from me. Fortunately for us both Bargall that didn’t happen. In fact you proved yourself out in those missions as an enlisted man.”

Finally smiling Talos added. “I’m proud to call you as a brother marine and so does the platoon.”
Last edited: Dec 13, 2018
B

As Bretharr heard about Talos’s reasons to what his opinions were of him, perhaps he might’ve been right, and, if he was to become an officer again, he should remain down to earth with his men far more. This experience as an enlisted man had been... Enlightening. If he was to become Lieutenant again, he would certainly have a lot more experience in how to command his troops.

As Bretharr heard Talos’s reasons for not exploiting him, it was fair enough. Talos then went on to state the obvious, there being hell to pay if he was incompetent or insubordinate. He didn’t want to ruin his career any further, probably a reason why he didn’t mess around. Or he was just sensible. Either way.

But the real heartwarming comments were when Talos spoke of his pride for Bretharr, making him glow inside. Perhaps the military might’ve been the right call. He had found his place in life, and it was here, fighting for freedom and democracy. Smiling, he said
“Thank you sir...” Not knowing what else to say, before taking a drink.

“Don’t mention it just enjoy the night.” Talos remarked but soon as he said it, he heard a beep on his commlink. A weary sigh escaped him. Duty calls as the old saying goes. Consuming the last of his whisky in a few seconds flat the marine lieutenant turned back toward Bretharr.

Placing a hand over the man’s shoulder he said. ”Just remembered the new Major Varyi wants me to brief him on our platoon. Sorry I have to go now but thanks for the drinks. You keep your chin up Bargall we marines have to stick together. Farewell comrade.”

Done, the bearded officer sat up saluted his brother in arms and walked out. Whatever the future Talos Barrenfist did regret the path he choose in life.