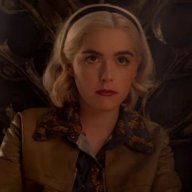 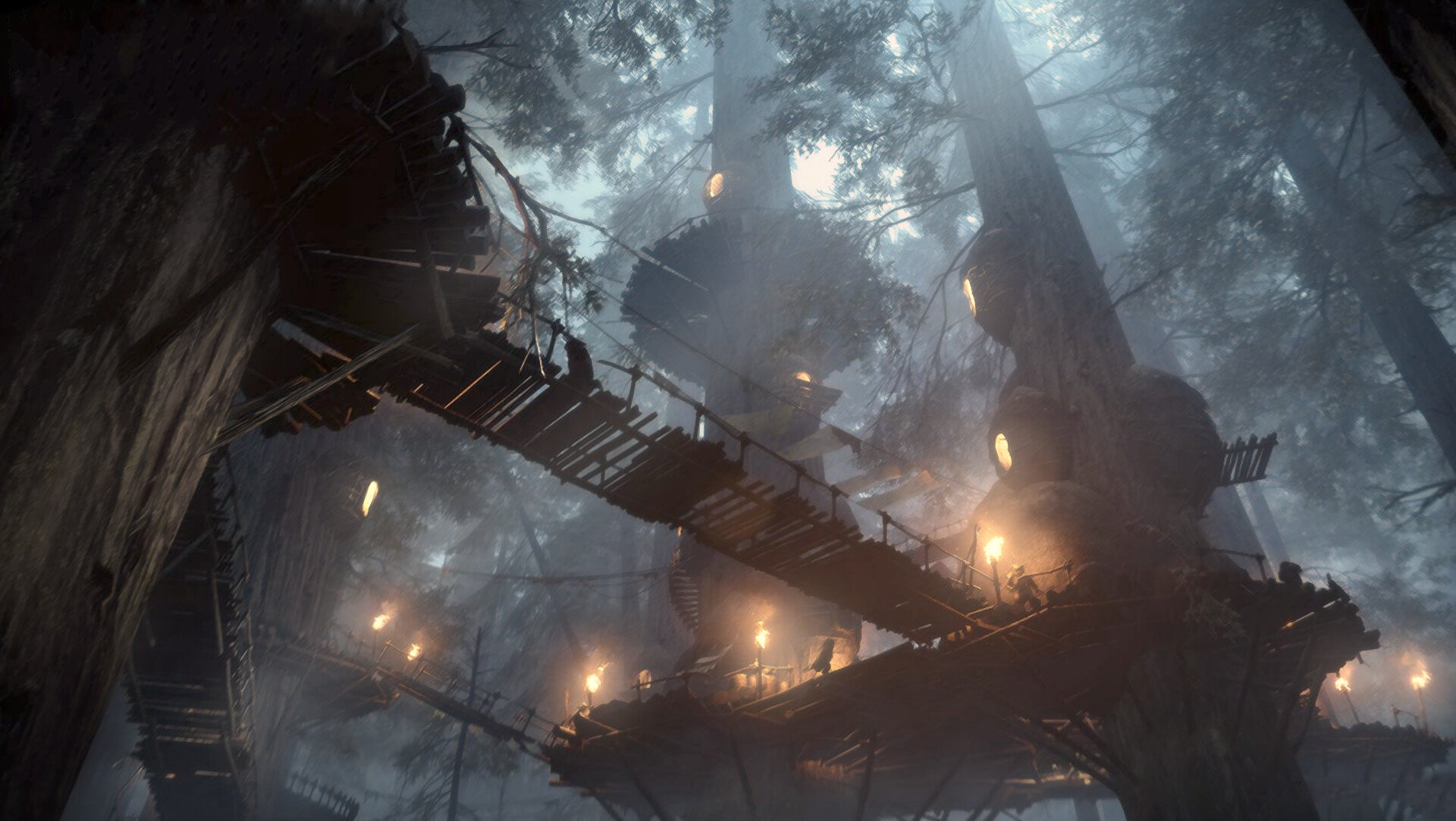 As far as locations went, the primitive settlement hidden away within the forest canopies was true to the preconceptions that the Governor had of the neighbouring civilisation; rustic, simple, but to some respects it was also impressive the scale in which the settlement had spanned - given the extremely primitive nature of Endor's native species. It seemed that despite the Forrest Moon playing a modicum of significance in the final moments of the Galactic Empire, very little had changed since then, the old imperial installations had fallen to ruins and the native Ewoks had returned back to their life of status quo. Leaving the world pretty much as it was always known to be, large forests encompassing the Moon, baring the jagged mountainous regions - leaving it's natural resources for the best part un touched and unspoiled.

Looking out of the view port of the Bakuran transport, the blonde governor pursed her lips in thought as she felt the ship bank to the side as it made its final circling approach towards the clearing nearest the Ewok settlement. The moon was for want of a better term ripe for the taking, however a show of force or invasion like those occurring off in the Mid Rim and Expansion regions would of course draw too much unwarranted attention. This would require a more subtle approach, one that was hidden away behind the same guise as what was shown on Rattatak - A neighbouring planet and it's civilisation reaching out to help safeguard worlds that had been left to fend for themselves by the Republic and the Free World alliance, after all as the centuries of history has gone on to prove. The Core worlds care little for what takes place in the farthest reaches of the Galaxy.

With that in mind, it had became something of an edict for the new Bakuran Governor, to reach out to the neighbouring worlds and civilisations and extend the hand of aid and support should it be needed. And, of course should the events of today go as planned, then it would be another world that would find itself part of a fledgling alliance of planets and worlds that sat out on the remotest regions of known Space. Whilst the Bakuran envoy would travel to break bread with the Ewoks and to introduce themselves, agents of the Sith Lord would in turn do likewise with the other native sentients. Ceryx's mission brief to her two apprentices was simple, Davin and Manuk were to travel ahead to the mountainous regions to engage with the Gorax and Duloks, two species equal in their primitive nature, but both shared a common trait, they preyed upon the Ewoks.

Afterall the True nature of the force was to drive the gears of evolution, the strong prey upon the weak, and the weak either fall prey or they adapt for survival. Given how the diminutive Ewok species had continued to survive with little advancement since the fall of the Empire, Evolution needed a helping hand to get going, which would fall upon the actions of the Sith Apprentices, to rile up and even equip the predatory sentients to take their seat at the top of the food chain and exert themselves as the dominant species - attacking the Ewok settlements.

Taking a deep breath as the ship touched down on the mosey undergrowth of the Forrest clearing, the blonde Governor made her way to the boarding ramp of the ship, wearing very little beyond her Political garb and her blaster side arm, Alyse stepped out of the ship, accompanied by her personal guard made up of the Bakuran security forces, along with a protocol droid that due to the historical distrust of droids held by Bakuran society was being being kept under a close guard - its presence being seen as a necessary evil, to act as translator for the Ewoks and the visiting envoys.

Me being a dingus and not tagged in peeps!..
@Corbeau @TWD26 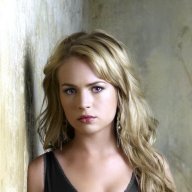 As her ship cruised over the tops of the immense Ewok father trees, Manuk searched with her mind, making use of the exercises her mentor had taught her – how to reach out and touch all life-forms.

She caught the stirrings of the furry Ewoks in their tree cities. She sensed large predators on the prowl: one humanoid behemoth, a giant Gorax, crashed through the trees, black hair swinging from side to side as he searched for Ewok dwellings low enough to grab.

As she flew onward, her mind ranged far and wide across the Endor wilderness. Then she felt a ripple, an echo of something that definitely did not belong.

Aware of her brief, she nonetheless decided to take a small detour to satisfy her curiosity.

Everything else seemed to have its place, but this did not conform. A stain that seemed to absorb all other senses, casting waves of leftover darkness that caused the creatures on Endor to avoid the place instinctively.

Manuk changed course and arrowed to the coordinates, circling once until she found an appropriate clearing. The repulsorlifts whined, and her landing jets kicked up fallen forest debris as she landed her ship in the underbrush.

Cautious and yet eager, she swung out of the cockpit and hopped down, landing with a crunch in the twigs and dead leaves. The breeze died, as if the forest were holding its breath around her.

She took four steps and stopped before the scorched earth. Unbeknown to her, it was the site of Vader's funeral pyre.

The ground surrounding the area remained dead and brown – despite the time that had elapsed. Though the thick forests of Endor were tenacious and fast-growing, no plants dared approach the scar.

Manuk swallowed and knelt in the dirt. She reached out tentatively, cautiously, until she let her fingertips brush the ground.

She jerked her hand away, then brought it back. The spot was cold, but the coldness seemed to go away as her hands grew numb.

Manuk reached out. Electric tingles went through her hands.

Curiosity kindled as opposed to sated, Manuk returned to her ship…and to her mission.

As the Bakuran envoy approached the Ewok village, they were greeted by a small handful of their warriors, if they could really be called that. Armed with primitive clubs and spears, and protected by a mis mash of protective armour, comprising of wooden, bone and the odd bit of white duraplast salvaged from the Imperial storm troopers that had either fell or surrendered to the Rebel strike force that had been present during the conclusion of the Galactic civil war. The Governors eye brow arching up at she listened to the ewokesse chatter being exchanged amongst themselves before being directed towards the envoy party, accompanied by the pointing of the tips of their spears.

//Maam, the Ewoks are questioning who you are and what your purpose for being here is// The protocol droid spoke as it awkwardly shuffled to better face and address the blonde Governor, whom at the time was gesturing for her guard not to raise their weapons. "Introduce ourselves as being a from Bakura, explain to the Ewoks we only seek to meet with their elders to extend a hand of support and aid" Alyse directed the droid, before casting a light smile towards the Ewoks and gesturing to the protocol droid as it relayed her message in their native tongue.

Keeping a passive expression on her features, as the guards deliberated amongst themselves. Inwardly rolling her eyes at these creatures, how they had been able to stop and hinder the Imperial army was a wonder, sure they had the support and aid of the Rebel strike team, but even from the records she had obtained, it was only force of small numbers. Whether they had served to be just mere distraction or more likely cannon fodder for the Rebel troops - part of her was questioning whether it would have just been more efficient to take the same approach as Darth Asminys and simply annex the forest moon, perhaps with enough spin there would be a justifiable cause and reason for Bakura to take militarised action against the world, but even then the Sith Lord knew deep down that it would require more than her times worth to make a convincing argument.

Her musings cutting short as the guards seemed to have come to a conclusion, with one of their numbers setting off ahead of the group, waddling over towards the near by village, before the two remaining Ewoks, shuffled about to address the envoy before waving and beckoning for them to follow. The Governors hand raising to cut off the protocol droid, as it relayed that the Ewoks had said to follow them - their actions were enough to indicate that the Envoy was being granted passage, she did not need a droid to needlessly reiterate that fact.