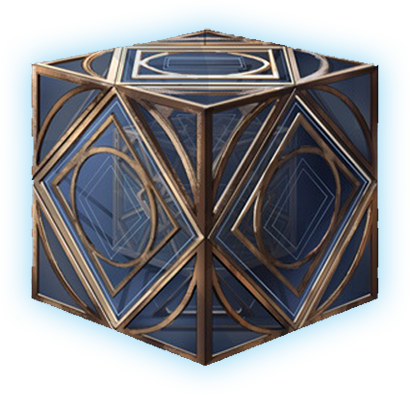 This Jedi holocron was constructed and recorded by Grand Master Wyck aboard the secret Jedi space station Brighthome in 6898 BBY. The artifact contained his teachings about the Force, the history of the Hundred-Year Darkness and the rise of the first Sith Lords, and contained a kyber memory crystal that contained the locations of every Jedi temple at the time of the holocron's creation—in order that future generations of Jedi would (hopefully) be able to restore the Jedi Order back to the state it was in before the war.

Before his death, Wyck presented the holocron to his former Padawan learner, Imani Sage, who concealed it somewhere on the planet Ifrane prior to her own death.

Like all Jedi holocrons, the contents of Wyck's device could only be accessed by another Jedi Knight. The Grand Master himself served as the holocron's gatekeeper, who was programed to restrict the information on the device so that the user only was able to be taught knowledge that they were capable of handling. Certain knowledge within the device could not be learned if the Jedi who opened the device was not strong enough or of a sound enough mind to wield it.

The device was meant to be used by a new generation of Jedi and contained Wyck's knowledge of the Jedi Code, its Nine Tenants, the Trials of Knighthood, and the Trials of Mastery, all of which he believed were key to rebuilding the Jedi Order if it were to ever fall into ruin. The holocron was also equipped to teach the user about the light side of the Force, how to use it, and how to avoid the traps of falling to the dark side.

For Jedi users with a basic understanding of the Order's philosophy and a similarly basic use of the Force, the holocron was then capable of explaining how the Jedi Order came to be ruined. The Gatekeeper Wyck was armed with his maker's knowledge about the history of the Jedi Order, the First Great Schism, and the ensuing Hundred-Year Darkness which gave rise to the Sith. The Gatekeeper also was capable of revealing his own part in the formation of the Sith Order as well as his warnings to future generations about the dangers of experimenting with the dark side of the Force.

For more advanced users, the holocron contained Wyck's teachings on Psychoscopy: a unique and useful Force power that the Grand Master had mastered in his life time. It also contained Wyck's thoughts on the secrets of retaining one's consciousness in the Force after death—though this was a secret that the holocron would not just share with anyone, only those Jedi who had proven themselves worthy of it.

Finally, once one had learned all that they could from the holocron, thus proving themselves worthy of its final secret, it would give up a small kyber memory crystal which, when inserted into the holocron's matrix, would reveal a star map to every known Jedi temple at the time of the holocron's creation. Wyck hoped that these secrets would be used to help restore the temples and the Jedi Order to its former prominence.