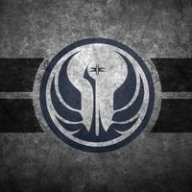 There was little question in Jedi Master Larik Novan's mind.

The last of the Jedi ships, retreating in the face of the mighty Imperial Armed Forces, would be taking off in the next few hours. The Jedi's Final Vigil was complete- their minds, hearts, and brotherhood connected as half of them fled their home while another half would stand to fight. It was an odd night, for Larik. In the morning, in just a few hours really, he would be standing on the ground engaged in combat against the finest the Sith, Imperials, and Mandalorians had to throw at them.

Previously, Larik Novan had served in the Special Forces as an Adjunct Lieutenant, filling in wherever he could. He had received a last minute promotion, however, and would be leading his unit in to battle the next day. Captain Novan. It had an interesting ring to it. Already he had shed his Jedi Robes, suiting up in his fatigues, a blaster at his hip opposite of his lightsaber. Long ago, he had sworn to uphold and protect the Galactic Alliance as well as the New Jedi Order. He couldn't go back on that promise.

Yet, the night was far from over. After receiving his own promotion, the Master Jedi had the honor of informing his second padawan about his promotion. Loogo Vsil, who had been under his tutelage for only a few years, was now a fully fledged Jedi Knight. The newly-Knighted Jedi would not be standing to fight with his old Master, however. Larik had given him his ship, and Knight Vsil would be aiding in the retreat. It was where he needed to be. Padawan Sunce, however, would stand by her master.

His bags packed, he threw them over his shoulder, as he turned around. Larik Novan regarded his room with a solemn smile. It was his first room as a Jedi, where he had first stayed when he was a young initiate all those years ago. It was quite probable that the man would die on the morrow, and while he was not afraid, he felt that everything had come in full cycle. Would tomorrow be it? Was this all he had ever worked for?

Shaking off the feeling, Larik forced himself back into the moment. Moving out the door for the last time, he turned to walk down the hall. He stuck out, as he was dressed in his Special Forces uniform, but the lightsaber on his hip and his face gave him away. Every Jedi knew who Master Novan was. He sensed many familiar presences, and felt the solemness and grimness of the occasion as he waltzed down the hallway. Suddenly, however, a very specific and familiar presence entered the area, and one that he had not seen nor felt in a long time.

The Jedi Master stopped in his tracks.

"I love you son. See you in a few days."
Lamb said. Seconds later she closed and placed the electronic device back in her utility belt. The hood to her Jedi robe will once again be raised over her head, covering her long red hair, and nearly concealing her facial features.

Fact was she was so convinced about her trip, nor was she convinced that she'll return. Tython had fallen. Empress Teta, gone. Coruscant was now on the verge of falling as well. Nevertheless, the red haired Naboo Jedi did the final prompting she felt the Force leading her to. It was that prompting that extricated her away from her duties as the Jedi Orphanage director on Z, and led her back to the Coruscantai Jedi Temple.

As she walked the halls of the familiar temple old memories flooded her mind. From her very first apprentice, to the several council meetings she'd been involved with. Memories debauchery during her time as an initiate, and memories of countless training sessions. Even so, Knight Lamb couldn't help but shake off the very dreadful aura permeating the air. She knew from first hand account (from the Alliance Prime Envoy, Gracelyn Maier) that eminent war was pending. What Lamb didn't realize was the toll said war has already taken on the Jedi. In lieu of training initiates/Padawans, the temple was virtually empty. The few souls that she did encounter appeared dejected and terribly beaten. Sadness overcame the woman, nonetheless she followed through with her goal.

As she made her final turn down the main hall, she sensed a presence. Immediately, she knew beyond a shadow of doubt who that presence was. The former master expected to see a being robed in the familiar Jedi attire, however what she saw was Special Force personnel. Despite the outer adornment, Jedi Knight Haloburner Lamb knew it was the rascal she had the pleasure of training a decade ago.

A few meters away, standing just as still as he, stood Jedi Knight Haloburner Lamb.

"Master Lamb!" the man explained in disbelief. He moved forward quickly, a huge smile upon his face as he grabbed his old Master in a hug. Few people had even Jedi Master Larik Novan deliver a hug, and Halo was one of the few that he had ever acted in such a manner around. The woman had certainly had a huge influence on his life- being his Master- but he always felt very familiar with her, more of a friend or a sister than an esteemed Master.

Regardless, the man had a great deal of respect for her. She shared both of his lightsaber forms, quite a few understandings of the Force, and a general outlook on the world. In the days of his padawan-ship, no one knew him better.

It had been a long time since they had last seen year other, though. Years. The war had stolen away the Jedi Master's life, in addition to his own Watchmen missions and his plethora of Padawans. It seemed like there always one vying for his attention. But regardless, it was good to see Halo! The man glanced at his chrono before stepping and back and regarding his old Master.

"Master Lamb!"
The elated voice of her former apprentice echoed through the hall.

Lamb knew from the day she laid eyes on her former apprentice that he was meant for greatness. Despite his rascal, and seemingly easy approach to life, the man had great potential. Even as Lamb turned to embrace Larik, she couldn't help, but smile. Out of all her former apprentices, Lark turned out to be The Star. That fact alone pleased Lamb. Thus when the young man exhibited the non-formal Jedi greeting, Lamb obliged. Even didn't mind being physically whisked off the very foundations of the Coruscantai Jedi temple hall!

"Indeed it is...."
"Mine, you've done well!"
Lamb managed to say in-between the long embrace.

"Let's see, why am I here? On the brink of the biggest war between The Alliance and The Empire yet"
The red haired teased while giving the man a quizzical look.

Fact was, The Alliance was virtually on the verge of the greatest diaspora yet. Lamb felt not only compelled, but moved by the Force to seek Larik. Seeing him in his Special Forces uniform confirmed Lamb's deepest fear- Larik's death on account of a good cause. An ideal that so many men and woman, Lamb included, continue to aspire to reach.

"I came to make sure I see you one last time. Just in case-"
Haloburner's words ceased.
She simply couldn't entertain the possibility of losing her star student and fellow Jedi.

It was no secret to the Corellian that his old Master held him in high regard. It was odd, to think that he had come so far in such a small amount of time. Even odder, however, to think about the last time he had seen her. In fact, it couldn't have been much longer after he had been promoted to a Master of the Order.

A lot had happened since then, though. Padawans, the war, Special Forces, his duties as a Watchman, classes, there had been so much that had gone on.

The man smiled at the red-headed woman as she joked with him. It was the nature of their relationship- light, less serious than what other Masters might expect out of their padawans. It was what Larik had needed when he was a Padawan, and it had aided him into becoming the Jedi that he was. The woman began to speak about her reasons for saying goodbye- but hesitated. Master Novan grinned at her.

"I suppose I may have to rely heavily on your teachings, Master," the man said, the grin widening, "But with that in mind, why are you even worrying?" The man chuckled to himself before accepting the scowling Master's concern. "I promise that I'll take care of myself, Halo," he said. "On top of my Jedi training, I had a lot of training to join up. Don't fret."

The man shrugged, his arms out wide, his half-cocked smirk prevalent on his Corellian face. "Nothing to worry about!" As Larik regarded the woman, his comlink beeped. Frowning, his joke was obviously over. His smile picked back up quickly, though, although it wasn't at what it had been.

"I'm afraid I have to go, Halo," he said. The man glanced behind him- no one- and then looked behind Halo- no one. The man looked back to Halo and leaned in, kissing her gently on the lips. The Corellian lingered there for a moment- a quick slap would soon bring him back into reality, or else she'd kiss him back. Either way, there was no guarantee he'd make it through the day, so Larik wasn't too worried about it.
Last edited by a moderator: Oct 20, 2013

"I suppose I may have to rely heavily on your teachings, Master..."
Jived Novan, to which Lamb interjected
"That you do. A dead Jedi is no use to the order."

It's true, the Jedi needed all the able and willing not only for the pending big battle, but also after the battle. While fighting is a noble cause, one that Lamb commends Novan for stepping up to, she knew also of the devastation war brings, and the work it takes for restoration. Lamb chose the latter over the former. She had to. Her duties as the sole director of the Jedi Orphanage on Zebitrope IV pretty much sealed her fate.

"Nothing to worry about!"
Came Novan's final assurance.
Lamb wasn't entirely sold on his idea, but nonetheless admired his courage.

"You seem set on your idea. For that I commend you-"
A small chime emanating from Larik's side interrupted the red haired.

What followed both rocked, and surprised Lamb. Was it some sort of childhood fantasy? Was it a strange fantasy of a service man? Or could it be that all these years Larik Novan had an eye for the petite red haired?

Thankfully, not a single soul was present to witness what transpired between the former master and her apprentice. Eyes wide open, and hod still over her head, the female Knight obliged. The lip-lock did not last too long, nor was it too short. Seconds thereafter, Halo moved her tiny left hand over her chin. A pensive look quickly graced her face.