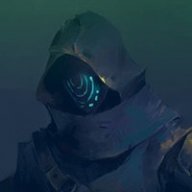 The Templar Guardians also acted as guards for the Vault of Creation, ensuring none but the Dawnwrights and Matukai Elders had access to the most powerful Light-infused weapons utilized by the Matukai. Clad in golden-scaled armor, as opposed to the more mainstream and traditional platinum-white, the Templar Guardians were nonetheless fully-trained Matukai, usually Savants, that were armed and armored in some of the highest quality equipment that the Matukai had created.

Armed with ceremonially designed wan-shens, gorgeously-sculpted body armor and waist-held swords acting as their secondary weapons, the Templar Guardians were a stalwart force against any who threatened the safety or sanctity of the Matukai Pantheon. Unlike the vast majority of the auxiliary Matukai professions, the Templar Guardians, obviously, were neither nomadic nor left the Pantheon at all. It would be only on extremely rare occasions that a Templar Guardian would even leave the region of the Black Mountain, although under special circumstances, some Templar Guardians have been seen as far out as the Matukai Monastery, located at the base of the Tears of Vashti, in the region of the Treysan Tundra.