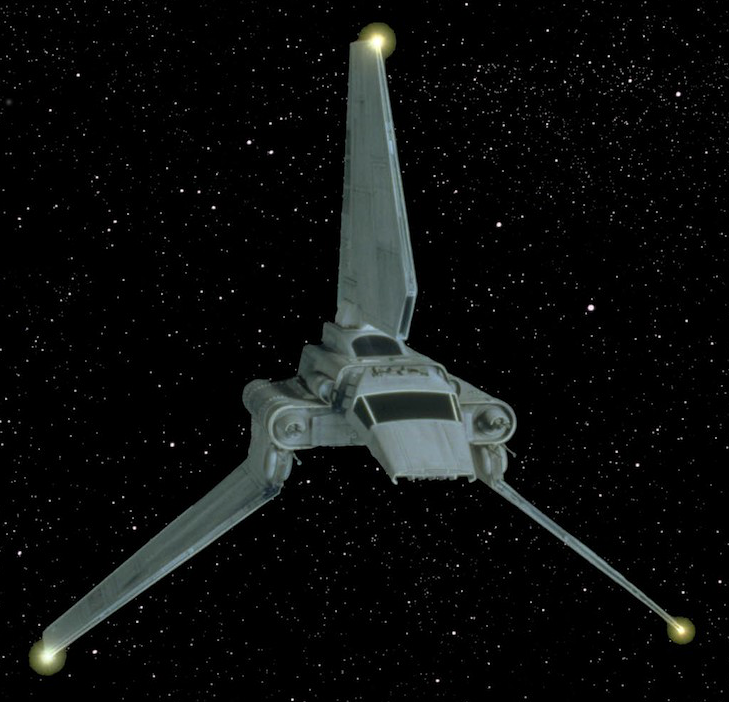 SPEED/MANEUVERABILITY
The Lambda-class shuttle has a top speed of 54 MGLT and has average maneuvering characteristics.


DESCRIPTION​
The T-4A Lambda-class shuttle, popularly known as the Imperial Shuttle, is a utility spacecraft developed and manufactured by a partnership between Sienar Fleet Systems and Cygnus Spaceworks. Featuring an elegant design not in keeping with the usual Imperial aesthetic, the Lambda class served as an executive shuttle, a troop transport and even a cargo freighter. They were the backbone of the Galactic Empire's vast logistics and transport network, serving as everything from launches on Star Destroyers to solo supply ships for far-flung outposts.

The Lambda featured an unusual folding wing design, the direct influence of the Cygnus design team, who were more used to making elegant executive transports than military utility craft. This design did allow the Lambda to take up less space in a hangar bay, however, useful for shipboard operations. The type could carry up to 80 tons of cargo and 20 passengers, and was served by a crew of 2, 1 pilot and 1 copilot; the copilot was not strictly necessary, but having a second pair of hands made flying the Lambda much easier. The Lambda was well armed for a transport; it was shielded, and carried 8 forward-firing light laser cannons, with a rear-mounted dual laser turret for fending off pursuing enemies. The shuttle's cockpit could serve as an escape pod with a 5-being capacity; this of course excluded most of the passengers, and it was intended that those with seniority would be given priority in the event of an emergency.

Though they were used by the highest strata of Imperial rank and society - even the Emperor was known to travel aboard a personal Lambda - most Lambda-class shuttles had a fairly low reputation. Notably, the type had cheaply sourced atmospheric processing systems, and examples used as troop transports often reeked of body odor from the troopers who rode in them.

Many Lambda-class shuttles survived the dissolution of the Empire, and some continued in New Republic service for decades after the Galactic Civil War. They can still be found today in many parts of the Galaxy, in service to local governments, military and paramilitary organizations, commercial charter services and even independent pilots. Even pirates and other criminals are known to make use of these sturdy craft for more nefarious work.


LEGALITY​
Restricted. Although they are technically mere transports, Lambda-class shuttles are still military equipment, and civilian operators will require extra licensing to operate one legally.