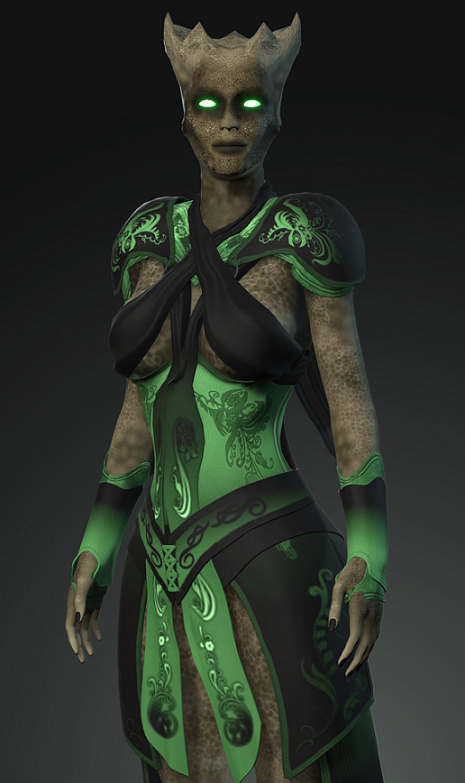 PHYSICAL DESCRIPTION
Shila exhibits the plant-like characteristics of the Neti species. She appears as a young female when shifted into a humanoid form. Her eyes take on a glowing green hue. By human standards, she might be seen as attractive, despite her bark-like skin and lack of hair. Shila has a fascination with the color green, so whether in a dress or in armor, she is almost always seen in some shade of green. Shila wears an easy smile and rarely possesses a cross look on her face.

PERSONALITY
Shila Dromm is not as reserved or introverted as much of her species. Unlike most Neti, she has traveled the galaxy a bit and learned through experience how to interact with all sorts of species, in good times and bad. She is proud of her heritage and is an advocate for her species. Overall, she has a positive demeanor and a good “heart”, which does shine through. Shila has a small phobia of fire in the form of open flame.

ABILITIES
Skilled Infiltrator
Shila has always been determined to get into place that she wanted to get into—or was hired to get into. Using a combination of slicing skills, maglock manipulation, lockpicking, stealth, social guile, fast-talking, and changing her persona, Shila has learned through years by way of experience the different techniques and methods to infiltrate different places. Each place is different and may require a different approach and a different set of skills that she possesses.

Talented Shapeshifter
The Neti are born with the ability to shapeshift, manipulating and pushing their bodies to differing shapes and sizes in the range of humanoid and tree-like shapes. The sizes range from 2 meters to 9.5 meters. Neti are able to shift their bodies in this way at will. Shila, talented even for her species in this innate ability, has been able to shapeshift, manipulating her body with precision, grace, and speed. This talent aids her in movement and utility.

Close Quarters Combatant
Shila is not a fan of blasters. While she carries one and sees the practicality with it, she is just an average shot with it and much prefers close quarters combat if she must fight. Fascinated with the versatility of electro-chain whips, she has learned how to wield this weapon with practiced proficiency after spending a few decades to learn the weapon. Even though the weapon is difficult to master, Shila is quite deadly with the weapon and practices with the weapon daily with the goal to master its use. 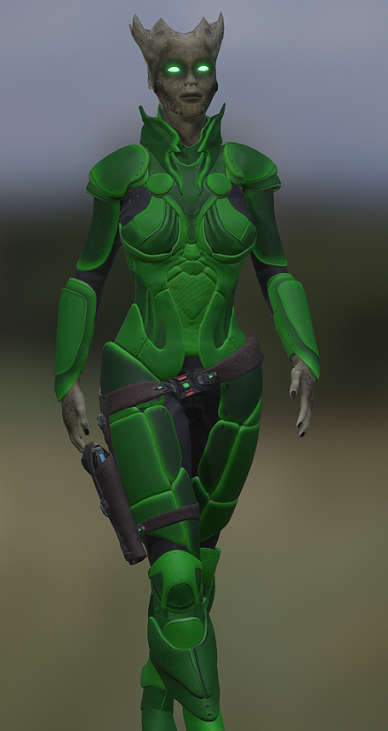 BIOGRAPHY
The Dromm Clan of the Neti have remained on the planet of Myrkr for millennia. For the most part, this clan has kept to themselves, never venturing out from the deep forests where they reside. When Shila’s seed germinated and she grew among her clan, her father knew she possessed a restless spirit. While her father was an accomplished force-user, she had no desire to learn those skills. All Neti are force sensitive and able to develop their connection to the Force, but as a young Neti, all Shila could talk about was the stars, space and adventure.

For two centuries, she stayed among her clan, learning about her shape-shifting abilities and how to refine them if she were to continue to want to travel the galaxy. Her clan made it clear that the galaxy was unkind, cold and unforgiving. In the Galactic Empire spread across the galaxy, the Dromm Clan would not allow her to venture out, promising they would let her when “time was kinder”. Regardless, she often snuck out of the forest and visited the frontier town of Hyllard City. It was here she began to learn about the ways of the world, technology, and simply how the galaxy worked. Those trips occurred with increasing frequency. When her father realized he was not going to be able to stop her, he let her go visit that dangerous town, but forbade her from leaving the planet. Shila loved her father, so respected his wishes to not travel off world until her allowed it. Following the Battle of Endor, she was allowed to make her own way.

Once allowed, Shila immediately left Myrkr. She took a transport to Ord Mantell and began trying to find work on that planet. She fell in with some questionable personalities and began learning trades that were best suited for criminals, but Shila wanted to learn those skills for another reason: her insatiable curiosity. The question would constantly pop in her head: “I wonder what is behind that blast door?”

Shila continued working with these contractors, learning skills in combat and in infiltration. In truth, Shila was beginning to fill a niche within the group as an infiltrator and close quarters combatant. She grew accustomed to interacting with other species and often those she interacted with would not even realize she was a sentient plant. At some point during this time, she was introduced to the electro-chain whip. She was fascinated in how the weapon could shift and change depending on the combat scenario. Shila was drawn to it, reminding her of how she also shifted and changed depending on the scenario. Taking a portion of her earnings, she hired a master of that weapon to train her in its use. It took some time to get proficient with it, but patience was something Shila had. It took decades to become competent enough in a fight for it to be practical.

During these many years, Shila began to harness her powers of the Force without conscious thought. While she is utilizing the Force in instinctual ways. There has been no formal training beyond tapping into the Force from a purely instinctual level: preternatural awareness, physical enhancement, and having a "sense" of what others are feeling.

As time passed working as a contractor, Shila began to see that this “crew” was showing less and less scruples. This lack of morality began to bother Shila and she parted ways with her crew. They were growing older anyway, while she remained “young”. The Neti found herself taking contracts from various member planets of the Free World Alliance and the fledgling Jedi Order. With these jobs being more of the scrupulous sort, she found herself enjoying that work much more...

Hey mate, I think your electrowhip link is broken.

Also, while the issue of the Neti shapeshifting sizes hasn't been a problem in the past it's generally accepted that shapeshifting in combat isnt really viable as it would be time and energy consuming.

Hi @Rom and thanks for the review.

I made the following changes:
- Removed any mention of the shapeshifting in combat.
- Fixed the electro-chain whip link