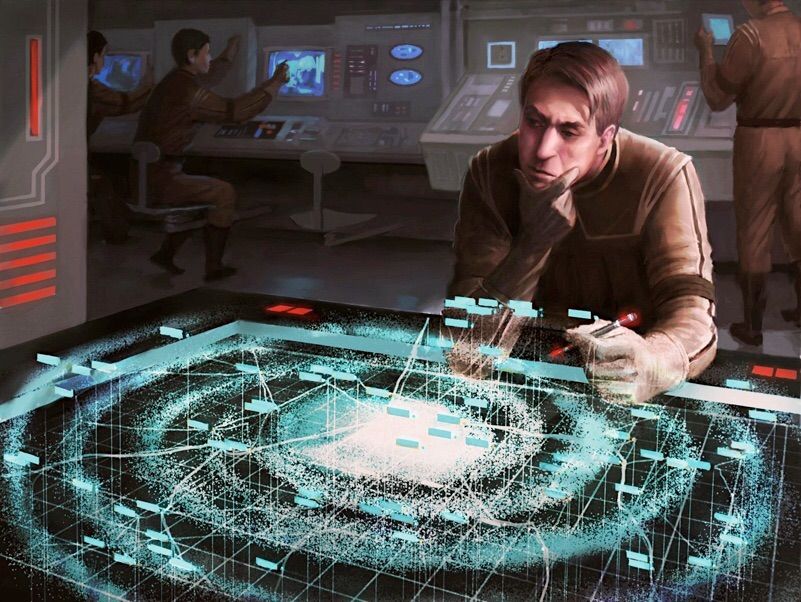 ​
Returning to Ajan Kloss had been uneventful thus far, though for the whole journey Saul had scarcely left the drive that contained a copy of the Ukian Black Box data out of his sight. This was hopefully the key to tracing back where the Knights of Ren had come from, why they had gone to Ukio at all. There would be a lot of information in here, and Force willing they would be able to decipher it to their next lead.

While the archives at Ajan Kloss were perhaps not as impressive as those that had graced the Order's greatest temples in their days of strength, its systems would be enough to let them look through. What would matter was if they'd be able to reconstruct it, find some meaning in what was written in the data,

Skkk-bhrk, Saul's rebreather heaved as he slid the data packet into the computer to begin the analysis. He was joined by Ky once again, their first meeting since they had spoken before the Council. This was an opportunity for both of them to confirm what they had found,


"I take it you saw what I did on Mimban?" he asked at first, the computer whirring and sputtering before a hologram shot into life, reams of information appearing before them,

"Well hopefully this will give us another lead yet" How could he forget? The images he had seen through psychometry were still burned into his mind. And that strange newcomer... He hoped whatever Saul and Yoddle had found on Ukio would be more useful than the images he had gleaned from Mimban. So far, their pool of evidence was... scant. But Ky was at the very least convinced that the dark side of the Force was at work in the galaxy again. That much, at least, seemed undeniable.

"Let's see what you've got." Ky tapped through the files as they appeared holographically in front of them.

Most of it was useless babble. Ship specs. Flight data. Incoherent numbers and symbols. But, somewhere in here, was the ship's cockpit communications. Ky knew if they could access that, they could at least learn more about the mysterious second assailant. The one who had escaped the Ukians' Y-wings.

But, it would probably take a moment to get to those files. So, in the meantime, he made conversation with Saul. "I don't know if the Council will take us seriously no matter what we uncover here. The evidence we've found is scant at best, thus far." He swiped through another file. "I'm thinking about gathering some of the others — Jedi we can trust — and forming an information network. That way we can all keep alert until the Council gets off its ass." @Nightfall

The data scanned over and over the screen as Ajan Kloss' computers slowly decoded the Ukian data. Both of them knew what they needed out of this, but how exactly they'd find it amidst everything else was a real question,

"Who knows, perhaps they will surprise us?" Saul offered in return jokingly regarding the council. Though he had his doubts, he had to trust, or else there was a great deal of effort gone to waste, and a great deal of investigation to explain if they refused. And that was not a conversation he wanted to have,

"It wouldn't hurt to expand the base" he mused, opening a promising looking file "It must be being felt by the rest of the Order, perhaps others have seen as much but haven't been able to report to the council either" part of him wished it were true, that way there would be broad consensus, and hopefully memories in the Order were long enough to know what had to be done,

"A united front, should anything happen" he finished in reply. And good timing too, as he looked through the files they moved further and further back into that evening, the chat logs finally ID'd the ship at the other end of the comms, and the pilots name was clear as day,