Ask Onderon Picking up the Pieces 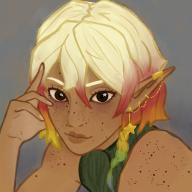 "Mmm..." Maura looked up at Hailee for a couple seconds before delivering her answer. "Twenty...fi-six?" She was pretty bad at telling ages, but she knew that padawans could be old too. Laenoas was like, thirty! That was super old. "Not compared to Master Voran though." She was like, hundreds of years old! Hailee though... definitely wasn't as old as Laeonas. "No! Twenty-four!" Twenty-four seemed like a good number.

Hailee took the datapad, and Maura eagerly peered over her shoulder to watch the woman play the game. "Go left! Always go left!" she chimed in when Hailee was faced with a choice between going left or right. "I always go left 'cause it's the easiest way to swipe!"

Maura continued to peer over Hailee's shoulder while bouncing up and down on the balls of her feet. "You're doing really good!" The teen didn't expect her to do very well. Most adults were pretty bad at games like these. "Oh! Oh! Get the power up!" She pointed the token out with an eager finger. "Then press that! It makes you invincible for a bit!" 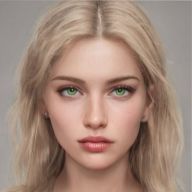 Now she was super curious about her answer. She had met a young child on Corellia once who had assumed she was close to her mid fourties...but to the child's excuse, it had been three. She was assuming that Maura wouldn't misjudge her so strongly, especially because there couldn't have been too many years between them, but this still hadn't stopped her from implying she was old...

As she started with twenty six she opened her mouth as an overdramatic expression of her disbelief and slight dismay. Was she looking that old?? Maura did correct herself and she started chuckling amusedly when it came to her next claim. "Close...twenty two, but I'll take that as a compliment...two years ago they still kept checking my ID when I wanted to buy booze, and -" she stopped herself, immediately remembering that she shouldn't advertise alcohol....right? "Well now everyone knows I'm an adult" she added with a sheepish grin before she turned her attention towards the game.

She squinted, trying to concentrate while the virtual landscape zoomed past her running character. As she mentioned to go left, she immediately did so, trying her best to keep avoiding the obstacles. "That's super clever!" she excitedly exclaimed as she realized that this was indeed easy.

Her little character kept running and running, the crazy Sith following close behind. There was a weird hint adrenaline rushing through her as the score kept climbing up. As she excitedly mentioned the power up she tried to reach it, but unfortunately she was too slow for that and right after, she literally began to panic as the game just started becoming way too fast. "Ahh what do I do? What do I dooo?" she hectically asked her, but not a few seconds later she collided with a tree stump. "Oh dann...that was fun though...perhaps I should download that" she amusedly quipped, but actually that wasn't such a bad idea, right? "Okay now you show me how it's done!".

"You're twenty-two? I'll be twenty-two in..." Maura began counting on her fingers while adding up the years in her head. "Sixteen, seventeen, eighteen, nineteen, twenty, twenty-one, twenty-two!" "...seven years!"

The girl went back to watching Hailee play her game, bouncing up and down on the balls of her feet the more and more excited she got seeing Hailee do better and better. "Go go go! You can do it! Left! LEFT! Nooooo!" Her features fell when Hailee died, and she threw her hands up in the air to express her playful mourning. "Nooo!"

She started giggling and took the datapad from Hailee. "I'll show you how it's done!" she repeated as she hopped up onto the bench. After starting up a new game, Maura immediately began racing along the randomly-generated paths, taking the left turn each time as she'd instructed Hailee before.

"This is what the powerup does!" she said to her as she swiped her character to the right to nab the item. Immediately her character began running super fast and through any and all obstactles - she was invincible. The score kept growing higher and higher, and Maura grew more and more focused on the game.

Now the blonde Jedi was indeed curious. She had estimated that Maura was around 14 and when she suddenly revealed it, she was a little proud of herself for having been so close. "I don't want to frighten you...but inguess those years will pass by quickly" she replied with a smirk, remembering far too well that she had been fifteen not long ago.

But this was not about nostalgia now...she had a game to win. Or well, to fail as it soon turned out. "Perhaps a stupid question...but can you win this game? Or does the score just keep climbing?" she curiosly wondered before Maura took it in her hands herself.

Would Hailee actually end up downloading those games? Hmm...maybe. They did seem like an easy way to let time pass while flying, so why not? Would she openly reveal that to anyone? Probably not. She still excitedly watched the younger padawan play and especially after she had ran through that power up, her eyes widened.

"Uh oh...ahhh branch! Oh watch out". Those utterances just escaped her as she tensely watched her play, however she soon shut up as she remembered that she was apparently talking to a pro player.

"Mm... I guess. Seven years is a long time though," Maura mused, speaking slowly and in bits between particularly busy parts of her run. "Master Voran is like, hundreds of years old though! That's old." The padawan couldn't remember exactly how old her master was, and although she certainly wasn't hundreds of years old, the woman probably only had a few decades before she could be considered so. "I guess Morellians just get to get old and look young."

"Uhh... there's no end to the game if that's what'cha mean," she answered next. Her eyes darted across the screen as she furiously swiped; the game had increased in speed quite a bit. "I think I win if I beat my last highscore though."

Maura continued to play for a while - maybe six or seven minutes - before she blinked and swiped left a moment too late. "NOOO!" She dropped the datapad onto her lap and placed her face in her hands, publicly displaying her grief at losing. "I was-" Yawn. "-so close to beating my-" Yawn. "-highscore!"

It'd been a long day, and Maura was just now hit with the truck of fatigue from the battle. She'd been pushing herself further and further all day. First, it was the fight. That took a lot out of her physically. Then, it was her conversation with Wodan. That took a lot out of her emotionally. So now, even just relaxing and playing games with Hailee, Maura could barely fight the onslaught of yawns that interrupted her every sentence.

"Sowwy," she apologized as she yawned once again. "I'm sleepy."

Hailee chuckled amusedly as Maura mentioned that those 7 years would be a long time. For Hailee, it always felt like time was running and so seven years were almost nothing, but yes...she had a good point with the grandmaster after all. "Oh true...I'd say living for so many years is a blessing and a curse, both...however still looking young is rather helpful I guess" she replied with a big grin, having huge respect for the grandmaster one way or another though.

She could have asked Maura a thousand questions about her training, but instead she let her focus on the game while attentively observing what she did. The explanation made sense, though she wondered whether this wouldn't get to boring after a while, because if there was no end in sight, how long was this little Jedi running?!

Maura's Jedi ran and ran with increased speed until finally, she failed. Hailee had stared at the screen for the whole time, wondering how the hell Maura had even managed to make out obstacles in that speed. The yawn immediately infected her and so she involuntarily joined in.

"Don't be sorry" she replied with a grin as she stretched her own tired muscles, "So am I...this day was draining. You can take a cabin and get some sleep. I'll stay in the cockpit just to make sure we stay on course and nap in the seat or something" she then added while she was already busy looking for a comfortable position. She ended up sprawled across the seat, head over one armrest and her legs over the other side. It wasn't too bad after all and it woukd suffice for dozing.