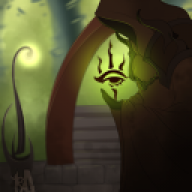 APPEARANCE:
Ruby-skinned and raven-haired, Ire bears the tattoos and short yet sharp horns of a tribal Zabrak, eschewing Sith tattoos which would risk exposing her allegiance to outsiders. She’s fit and flexible to the degree that a stranger might assume she’s a gymnast.

Her choice of attire is unified only by her preference for concealing clothing. Otherwise, she dresses according to whatever is most appropriate for her location and purpose; she frequently discards clothes once she completes a task in order to avoid being recognized.

ATTRIBUTES:
Her adoptive family’s alchemy testing on her bloodstream resulted in a higher-than-usual natural defense to toxins which would otherwise paralyze or poison her. Her hand-eye coordination is also excellent even without Force use; she can naturally leap long distances or at odd angles and find foot- and hand-holds.

Conversely, Ire has a poor business acumen due in part to her inexperience in truthful interactions. In a black market or underworld bazaar, she’s likely to be overcharged or swindled. She’s so used to achieving her goals through deception that, when she must play by the rules, she has a high chance of losing.

PERSONALITY:
Quiet and observant, Ire’s devotion to the dark side manifests in a sort of unspoken judgmental criticality. On the outside, she might almost seem pleasant, but that’s due to her reserved nature. Her true friends know how she regards them once she actually voices her disagreement - the more she likes someone, the more honest she’ll be with her tendency to constantly criticize. Because competence and success are assumed to be a default, she usually doesn’t share positive words, projecting an image of reticence which she doesn’t even realize. The flip side is that, while not a perfectionist, she’s a harsh judge of herself as well, causing her a measure of intrinsic stress.

BIOGRAPHY:
Born to an uneducated Zabrak family in the Unknown Regions, Ire was kidnapped during infancy when her Force sensitivity was detected by a vassal cult beholden to the Guardians of the Eternal. The cult raised her as a family alongside other kidnapped children, training her and her adoptive siblings as a service to the Sith Eternal. She was found early on to have the aptitude for infiltration, and consequently her life has been focused into a caste-like structure, molding her to perform duties which require a touch of subtlety.

SKILLS:
Despite her Force sensitivity, much of Ire’s training honed her non-Force skills. She’s adept at infiltration, having survived sessions of climbing, parkour, rappelling, and spelunking…blindfolded. Her clan provided her with the best instructors in assassination, disguise, slicing, and stealth they could enslave.

Her Force training focused on improving her potential for sabotage. Concealment, detection, and illusion formed her basic training, alongside her aptitude for basic control and sense powers. Her favored Force ability, however, is her psychometry - she can recall the exact details of past events from items as simple as strands of hair and cloth or the dust from a sentient being’s shoes.

ROLE-PLAYS:
Hoping to fill this out soon!

PETS:
No. in her view, animals are resources to be used, not companions.

IMAGE NOTE:
The picture below belongs to an artist named Ds2zhk on Deviant Art. It represents my mental image of Ire almost exactly, but I do not own it.

I think I’ll have to archive this character since I didn’t think out the backstory and premise well enough.