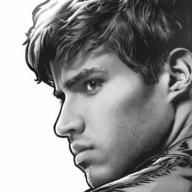 When the sun rose over the ruins of Great Library, a reverent gasp escaped Ty'kh’s lips. The massive ruined temple, with its hundreds of stone passages, stairways, and statues, rose up like a hand reaching for the sky. Kingwood trees pressed against each side, pulling at the stone in an attempt to reclaim it, and the massive moat surrounding the main entrance shimmered orange and gold. In the distance, columns were the only complete thing remaining of an isolated secondary edifice, everything else had worn and crumbled – their decay the only marker of time in a place of uncounted days.

As a scurry of Gokobs passed him by, Ty bounced; he was generally not easily frightened, but something about the unspoken grandeur this place impressed upon him a sense of unease. Thankfully, in a few minutes, he'd be climbing the cobblestone stairs, sustaining the gazes of the few Jedi statues still standing, to gain entrance into the half-crumbled main building of the complex. It had taken twelve long hours to get here on foot, but despite all the obstacles, he’d finally arrived.

History had long forgotten the cause for its destruction, but the site was still frequently visited by pillagers. Ty'kh, himself, had been sent to investigate the ruins of the Library of Ossus by his organization. A reed-goose's chase as some would put it, a sort of initiation rite for he had been ordered not to return until he found something worthwhile. There were still those within Crimson Dawn who doubted his determination to join their ranks, for Ty was not your average criminal and they could not relate to him.

The young scoundrel doubted he would find anything really interesting within the weather-worn halls of the forsaken temple, but he was determined to at least try to prove his detractors wrong by applying his signature creative thinking to the task at hand. He had opted to take the journey alone for he mistrusted the other members of the syndicate as much as they him, but right this moment, as he was about to take his first step through the archway to gain entry into the vestibule and his courage threatened to abandon him, Ty would have given almost anything for some company... 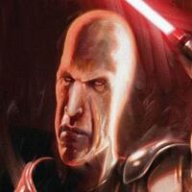 "Another treasure hunter?" a deep voice asked from behind the young scoundrel. The voice belonged to a Muun wrapped in dark-colored garb, though the hood of his robes were draped behind him exposing his egglike head. "You are much too late to find anything of worth to sell in these old halls. Jedi Master Luke Skywalker was the last to pluck secrets from this temple and I would expect whatever it was he found to be on Ajan Kloss with the rest of his... religion."

Melkor Damask attempted to hide the contempt he felt for the Jedi Order, but his voice came out flat despite his best efforts. The Sith Eternal cult was hidden from the rest of the galaxy. None could know they survived their last Master's death. Fortunately, Melkor had picked a profession that gave him good reason to nose around the ruins of old Jedi and Sith temples. To the galaxy at large, as far as anyone knew, he was simply a controversial academic.

A pair of P-0-TC surveillance droids orbited the Muun's head like two small moons and, remembering them, Melkor added, "Don't mind my droids. I'm conducting a study of this site for my work. They help me to record and catalogue my findings." Melkor took several strides up the stone steps so that he was closer to the human. "But forgive me, I've not introduced myself. I am Doctor Melkor Damask of the University of Bar'leth. To whom do I have the pleasure of speaking?"

Even as he said the words, Melkor cautiously stretched out with the Force to get a read of the human youth. He was careful not to touch the young man's mind in case he was a Jedi or else trained to resist the Force's mental probes. Instead, he simply measured the currents around the young man. If the youth had no training at all, plucking away the thoughts he carelessly projected into the void would be simple; and it was prudent for Melkor to determine if he should allow the human to leave this place alive or if he might find some purpose for him. @Aberforth

Unaware of the Muun's presence until he had spoken, Ty had reacted as any decent scoundrel would: his left hand had automatically slid down to the blaster conveniently secured on his belt. Pausing just long enough to realize that his interlocutor posed no immediate threat, he relaxed turning to face him. "You really shouldn't sneak up on people like that, especially not int these parts," he advised gazing directly into Melkor Damak's eyes to size him up. As he did, a shiver was sent down his spine.

Despite the fact that he had met many different species of aliens during his travels, Ty was forced to admit that there was something about the Muuns that he found unsettling. Perhaps it had to do with their gaunt silhouette that plunged all those who stood next to them in shadow, or the hairless cranium that formed a shield guarding their disproportionately sized cerebrum, or even their pale grey skin that would have been indicative of decay in any other species.

"The name's Ty. I'm afraid I don't have any fancy titles to go with it," he promptly added trying to appear unintimidated. Although his mother had been a scholar, his secluded childhood on Ordo had meant that he had not met many of her colleagues, and Ty'kh had always admired the intellectual integrity of those who had devoted their life to academic pursuits.

As a member of Crimson Dawn, Ty'kh knew that the stories of the Jedi were more than mere myths, but to many in the galaxy, they were only the stuff of legends. Electing not to let on more than absolutely necessary about himself, Ty decided to fain ignorance. "What were you saying about Luke Skywalker, heh? I'm not one to believe in fairytales, Doctor Damak."

"Anyhow, I guess I'll be seeing you," he said nonchalantly. "Unless you care to join me?" Not waiting for an answer, Ty pressed ahead as though he had not been interrupted hoping that the Muun would in fact closely follow. Disregarding any concerns for the structural integrity of the ruins, he made it pass the entrance's threshold without any difficulties.

Melkor sighed. "I may as well accompany you," the Muun said as he followed the young human through the door. "Jedi temples can be... tricky things. I can be your guide. Besides, there is something I am looking for in this temple as well."

Inside the Great Library of the Jedi, the Force was strong. Melkor was temporarily taken aback by how powerfully the echoes of the library's previous owners still lingered. He was quick to wrap the Force around his mind: a defense his Master, Bendak Ko, had taught him for warding off the visions old places such as these tended to give. But even his defense was barely enough to stave off the power of this place.

Remarkable, he thought to himself when the attack finally came to an end.

The young man didn't seem to pay him any mind. Before they had entered, Melkor had sensed the human's ambition. Ty was here to prove himself. The observation had taken Melkor back to when Bendak had first found him on Muunilinst. Back when Melkor himself had been an eager youth, desperate to prove himself worthy to his Master.

He is young and pliable, Melkor observed. But ultimately too green to groom as a pawn. And yet... The Force brought him across my path.. But why?

The droids that had circled Melkor earlier floated into the temple after their master. The Muun turned to them and, in a language the boy wouldn't recognize, said, "Zuti. Xauti nun tave ardu'kardas." The droids obeyed and vanished into the temple and Melkor stepped forward to address the youth again, "You never did tell me what a young human, such as yourself, was doing in a Jedi temple all by himself." @Aberforth
You must log in or register to reply here.
Share:
Facebook Twitter Reddit Pinterest Tumblr WhatsApp Email Share Link
Top