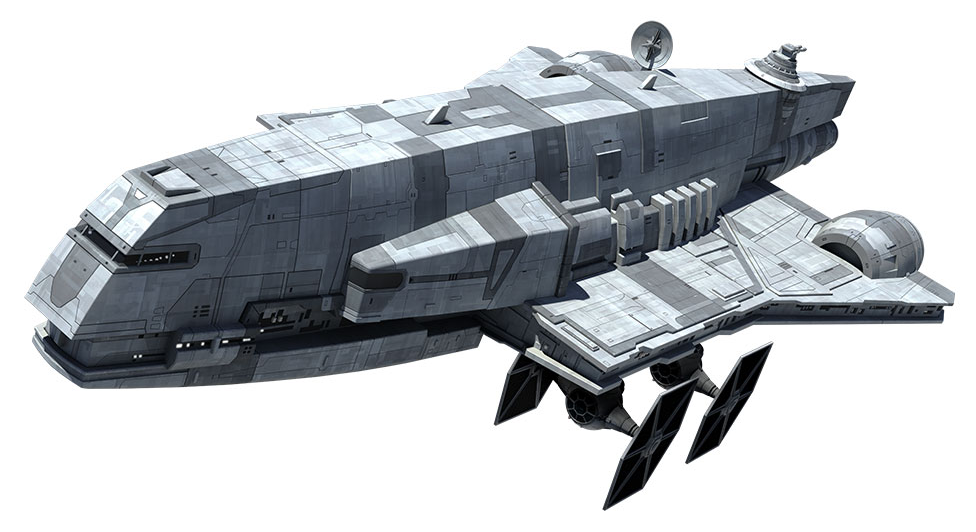 SPEED/MANEUVERABILITY
The Gozanti-class cruiser has a top speed of 60 MGLT and has average maneuvering characteristics.


DESCRIPTION​
The Gozanti-class bulk cruiser is a large armed transport vessel manufactured by the Corellian Engineering Corporation. Making its debut prior to the Clone Wars, the Gozanti was designed for reliability and durability, and was operated by numerous factions prior to and during the war, including both the Galactic Republic and the Confederacy of Independent Systems. After the war, the Gozanti was one of the few wartime starship designs to be retained in service by the Galactic Empire, becoming the New Order's vessel of choice for low-priority patrols in systems which did not warrant the presence of a full-fledged capital ship.

The Gozanti-class freighter is a simple design, just under 64 meters in length with an armored duranium hull, heavy shields and a pair of dual heavy laser turrets. The ship has a full complement of 26 personnel, including 12 crew or a minimum 4, and 14 passengers, typically a squad of stormtroopers and 4 TIE pilots in Imperial service. Cargo capacity is 75 standard tons, with consumables sufficient for up to a standard month.

Notably, the Gozanti is capable of carrying large external loads, with hard-points under the fuselage for transporting heavy Imperial vehicles such as AT-ATs into battle; two of these heavy walkers can be accommodated, or four of the smaller AT-STs. More commonly, however, the Gozanti is equipped with ventral docking pylons for up to 4 small craft, usually starfighters and typically the Imperial-era TIE/LN, although other designs can also dock. 2 more docking ports exist on the ship, but these are generally kept clear for visiting craft. These docking pylons allow the Gozanti to carry its own starfighter escort through hyperspace, and give escort pilots a break from the cramped cockpits of their own ships.

Though not a match for more heavily armed warships such as full-fledged corvettes, a Gozanti and its parasite starfighters were perfectly sufficient to take on the small pirate bands and smugglers commonly encountered in backrocket systems. They were, on average, much more commonly seen than the iconic Star Destroyers that anchored the Imperial Navy, and were arguably the most visible aspect of the Imperial military, after the ubiquitous stormtroopers and TIE fighters. A Gozanti-class freighter was often the first command given to rising Imperial officers, and the type was remembered fondly by Imperial veterans even after they moved on to more prestigious postings.

After the Galactic Civil War, Gozanti-class freighters remained in the New Republic's inventory for many decades, serving in much the same role as they did during the Imperial era. The type also persisted in civilian service, and with the navies of small planetary systems and mercenary groups. Even the pirates and smugglers they once fought used Gozantis. In the present day, the type is less common than it once was, but can still be found in many parts of the Galaxy.


LEGALITY​
Restricted. Gozanti-class freighters, though they are technically transports, possess heavy weapons and can carry starfighters. As such, civilian owners will require extra licensing to operate one legally, and will receive increased scrutiny by authorities.


RESTRICTIONS​
Gozanti-class bulk cruisers are reasonably common and quite old, but are not easy or cheap to obtain. They are typically faction assets, although they could also serve as the focal point of a player-run business venture.