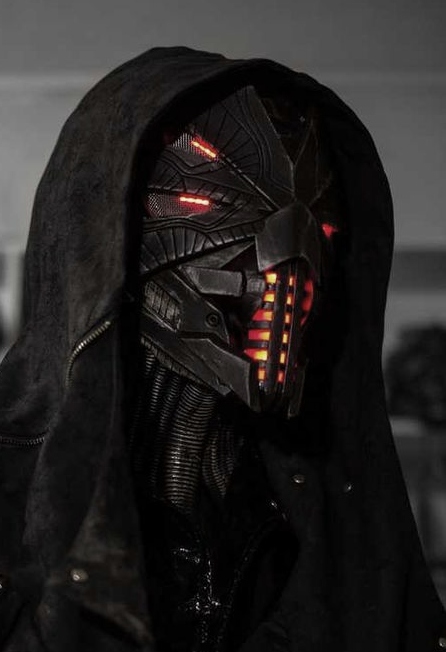 The Knights of Ren have need for being both intimidating and balancing with mystery. So naturally a helmet or mask is in order. So Malakai A.K.A. Kai (among the Knights of Ren "Cuga Ren") has personally requested the crafting of a helmet for these purposes to be exclusively used for Knights of Ren business. He doesn't want people catching on when he is doing normal work around the galaxy. (second picture.)

Always accompanied by dark clothes, Kai will often wear jackets, coats or less 'lower level nar shaddaa' clothes and more 'I'm a galactic street kid' clothes. Still wearing sneakers along with most of his other equipment Kai keeps the protective capabilities of his hand armor. Unlike his normal armor, the armor protection is not stylized in any manner other than black to keep with the desired aesthetic and anonymity. The gloves are able to tap and use touchscreens when worn as well.

LEGALITY
Illegal if recognized as a Knight of Ren mask
INTENT
A personal set of Knights of Ren armor but mostly for the helmet.
ADVANCED TECH
NO. But this is a one of a kind set.
Type and Coverage
Type: Light Armor
Coverage: (Coverage regions for Light armor is 1-3 regions, Medium is 4-5, Heavy is 6-7)