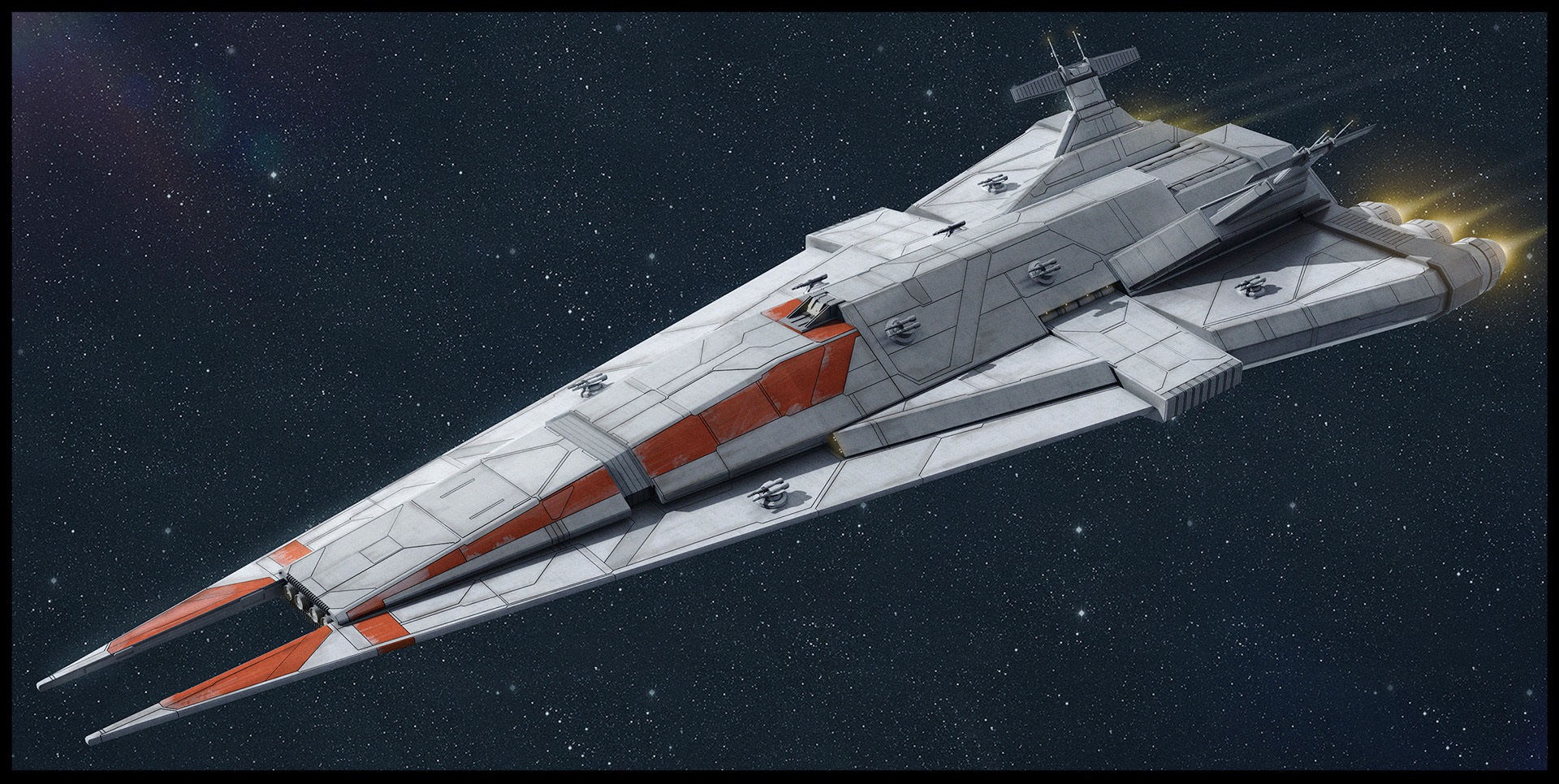 
DESCRIPTION​
The CT-Q auto-command frigate is an armed, entirely automated capital ship manufactured by a partnership between droid maker Cybot Galactica and starship firm Tykannin Drive. It is primarily marketed to operators of the CT-P auto-picket corvette, and can act as a command and coordination vessel for a squadron of other droid ships. One of the first droid warships to come on the market since the Clone Wars, the existence of the CT-Q is a troubling sign of the times as the Galaxy enters a new era of increased instability.

300 meters in length, the CT-Q falls into the frigate category, as defined by the Anaxes War College System. Being a droid vessel, however, the manufacturer thought it prudent to limit the CT-Q's armament, meaning that the ship is not actually very well armed for its size. Weaponry consists of 12 turrets - 8 dorsal, 4 ventral - mounting non-lethal ion cannons, plus a quartet of tractor beam projectors for grappling disabled enemy ships. More vindictive owners may substitute the ion cannons for actual laser cannons, although this is not condoned by the manufacturer, voids the warranty and may place the owner in violation of certain laws in many parts of the Galaxy.

Although it is a droid ship, the CT-Q does have a "crew" of sorts, consisting of an integrated command droid brain, a separate pilot brain to fly the ship, a fleet coordination brain and a collection of 40 mobile droids which perform internal maintenance, security and other duties. This contingent usually consists of 20 maintenance and repair droids which handle upkeep and damage control, 12 dedicated security droids who may be used to repel hostile boarding parties or undertake boarding actions themselves, and 8 medical/service droids, who attend to any organics who may be brought aboard over the course of operations.

Unlike smaller droid vessels offered by Cybot-Tykannin, the CT-Q is equipped with an internal hangar for carrying light craft, usually starfighters; light starbombers could theoretically fit, but there is no secure stowage for munitions, so this is not recommended. The manufacturer offers a package deal with 8 CT-O auto-pursuit starfighters to qualified customers.

Notably, although all of its flight, command and maintenance systems are automated, the CT-Q does have limited accommodation for organic passengers. Although most accessible areas of the ship consist of engineering spaces primarily designed for droids, not terribly hospitable to organic life, an area equipped with life support and certain other basic amenities is also provided. There is sufficient space for approximately 40 organic sentients, twice that of the CT-P. This capacity allows the CT-Q to undertake the duties which might be required of a large patrol craft by most planetary governments, including search-and-rescue operations and customs enforcement, with facilities for transporting and treating injured beings, as well as detaining criminals. In an emergency, 8 5-passenger escape pods are available to evacuate any organics aboard.

Notably, CT-Qs are equipped with extended consumable reserves and a high cargo capacity, making them well suited to escorting large convoys as a deterrent against pirates. They are also sometimes used by sector governments to patrol remote or otherwise seldom-visited regions, usually as part of a small squadron. Also of note, CT-Qs are often used as drone barge leaders for convoys passing through dangerous territory.

The CT-Q, although designed as a capital ship, is not as capable as most similarly sized warships crewed by organics. Although arguably more sophisticated than the shipboard droid brains of the old Confederate Navy, CT-Q command and coordination brains are still considered predictable and sluggish to react to changing tactical conditions. As with most droids, of course, accumulated experience and avoidance of regular memory wipes can lead to greater competence and new skills.


LEGALITY​
Restricted. CT-Q auto-command frigates are classified as droid capital ships under Galactic law, and are subject to numerous and strict laws regarding their capabilities and use. As such, civilian owners will require extra licensing to operate one legally, and will receive increased scrutiny by authorities.


RESTRICTIONS​
CT-Q auto-command frigates are droid capital ships, and cannot be owned or operated by individual characters. These vessels may be acquired as faction assets, or may be jointly owned by at least 4 player characters who work together regularly.