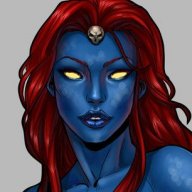 She had lost track of time, and she had kept her capitalist empire growing. BIT had grown beyond anything she could have dreamed. She was in every industry, and her face was splashed all over media, and she was consistently listed among the richest and most powerful people in the world. The galaxy heard of her company, which had now become a household name.

And yet, here she was on a backwater planet, having worn a hat and some sunglasses to disguise herself. She hoped no one here would recognize her, and so far no one had.

The morning had begun like so many others had - her assistants told her of her agenda for the day and key meetings she had. She was used to meeting world leaders and other important figures now, but none of that mattered today. She had made some big decisions, and she told herself she wouldn’t look back.

Tasha had to do a bit of extensive homework to find herself here, and she prayed the address was correct. She glanced down on the number and street name, grinning at herself as it was scribbled on a piece of paper. All of this had been done in haste, and so different than her perfectly planned life.

She had lovers in the past two decades, some that she even considered serious. And yet, her work always won in the end. Tasha was never one for family or kids, and she doubted that would ever change. She made the marks she wanted to make, and she had found peace.

And like once before, she found herself on the other side of a door and feeling as lost as she did many, many years ago on a rainy night. Tasha drew in a deep breath and knocked sharply on the door, removing her hat and the shades. There were a few more wrinkles around the eyes, but her beauty did not falter over the years. The blue sheen was as bright as ever, and the hair was vivid save for a few streaks of silver she wore with pride. 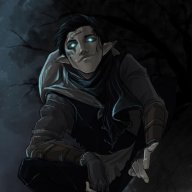 A small shower of sparks erupted from the workbench as he leaned over the small remote droid. He had been here longer than most places over the last twenty years. Spending most of his time living in a ship on the move, it had been nice to settle down for a bit but he had started to feel the itch to move again.

Still, he couldn't leave without finishing the repairs on the droids he had promised a group of neighborhood children. He connected a couple more wires and then set the tool down before turning the small droid on that buzzed to life before rolling back and forth on the workbench. "There ya go, little guy. Try to stay out of the way of angry Wookies for not on though," he said.

There was a knock on the door. Just on time. The owner of this droid, a small human boy who lived several houses down and bugged him nearly every day since Gil had agreed to fix the droid. Gil picked up the small droid and made his way to the door.

The door slid open. "I told you I would have him finished toda..." he said trailing off as he looked up at the tall blue figure standing in the doorway. Not much surprised him, but this had caught him off guard. A somewhat shocked expression quickly turned into a grin. "Tasha." he said warmly "Its really good to see you," he said.

Gil looked much the same as the day he left. The long-lived species he belonged to aged slowly and he wore clothes similar to the day he had left BiT over two decades ago.

"Its a rare thing to catch me off guard, though you always had a knack for it." he continued, waving her inside as he took several steps back.

For a moment, she was frozen in place. The surprise on her face the same on his, though it soon passed. She hadn’t seen him in a very long time, and she hadn’t exactly rehearsed or practiced what to say. Tasha opened and closed her mouth a few times, but nothing came out. She suddenly felt very foolish for being here.

What if he had a family of his own? What if she were just randomly barging in on his life and being presumptuous? Tasha noticed he stepped back to allow her in, and she offered a smile and walked in. As usual, it was difficult to tell from just her eyes how nervous she was - though Gil was one of the very few that could tell no matter what.

“I’m… caught just as off guard, honestly,” She muttered quietly as she walked in and surveyed his place. It looked as modest as ever, but so far she only saw traces of him. There were no family portraits, no remnants of anyone else, but that was just at first glance.

“I didn’t exactly come here with a plan,” She admitted, looking over at him, “But uh...I did step back from being CEO of the company and left it in capable hands,” It felt strange saying it out loud. She knew the company would continue on just fine with her remaining on as part of the board of directors.

“So...what have you been up to these past few years?” She felt stupid making small talks. Tasha looked back at him, feeling her heart beating quickly and throwing her off. Memories, pains and joys all came flooding at once, and she didn’t know how to process it all. And so she tried to keep her external poker face on as best she could.

He grinned slightly as the door closed behind her. She was clearly out of her comfort zone, and he had forgotten how much he enjoyed watching her squirm a little under the weight of fairly normal interactions. He set the droid he had been repairing earlier down on a cluttered workbench

"I didn't think you ever did anything without a highly detailed plan." he said. Her next words caused his ears to perk up slightly. "Now, that is shocking. I had always pictured you working until the point you were on your deathbed, and even then you would probably still be working." he said pulling several glasses from a cabinet and placed them on the small counter between them.

His place was small but organized, he had grown used to living in small quarters. It made him feel safer for whatever reason. He poured dark colored amber into both of the glasses and slid one towards Tasha. He held up his own glass towards her. "To retirement, then" he said with a smile.

Gil smiled into his glass. She had gotten better at casual conversation, the question almost didn't sound like torture for her. He shrugged A little bit of this and that. Mostly moving around seeing what trouble I could stir up. I was actually planning on leaving tonight after I had returned the droid." he said. Most of his time was spent drifting, helping out wherever he could. It was a different lifestyle than most preferred, but it satisfied his restlessness.

"The company seemed to get along fine without me. I knew you were going to do great things, but even still, its pretty amazing how large it has become." he said.

"So what are your plans for retirement?" he asked with a raised eyebrow.

He was so at ease, that she envied him. She remained where she was as he walked over to get them glasses. They had been here many times - talking and sharing a drink. That had been back when they had no qualms about having an active ‘relationship’. She had battled with her feelings and emotions, and they had both admitted them to one another. It all felt like centuries ago.

Tasha smiled as she clicked her glass against his, taking a sip from the glass. Her eyes never left him, and she constantly kept trying to read him. She hadn’t used the Force in decades, and she had a very tough time reading others anymore.

She quirked an eyebrow at his words, “Leaving?” Tasha looked around, and it simply confirmed that he had been moving around and never lingering too long. He didn’t mention anything about settling down, so she allowed herself a few assumptions.

As he asked about retirement, Tasha couldn’t help but smile again, glancing down at the glass in her hand, “Honestly...I was hoping the plans included you,” It took her a moment for her to look up at him again, the smile fading this time. She was never good with words when it came to topics like these, especially with him. It felt foolish to even broach it so many years later.

“I mean-” She blurted out, “I…. I know I just showed up out of the blue after so long,” Tasha was shifting uncomfortably, an uncommon habit for her, “And I know things change...I… ugh, forget I said anything.”

He downed the contents of his glass. "Can't see the Galaxy from this apartment." he said with a shrug as he placed the empty glass back down.

If this had been any other person who had just walked back into his life, it would feel weird but it felt completely natural to be here with her, even after twenty years. It felt more like home than he had felt in a long time.

His grin widened as she looked down, obviously uncomfortable with anything come close to actually discussing her feelings. He remained quiet, letting her struggle through it even as she started to back peddle. Gil let out a quiet laugh. "Some things never change." he said taking a step closer.

He held her gaze for a moment, it felt like no time had passed for him. Feelings that he had neatly tucked away until she had been ready bubbling back to the surface. There hadn't been anyone else, there never could have been. He reached up slowly and ran a streak of white hair through his fingers. If this were one of those cheesy holo-dramas, he would have said something wildly romantic, something to sweep the girl off of her feet but that wasn't them. Besides, if he had learned anything, it would have just as likely scared her away. "The white looks good." he said releasing the strand of hair.

"Well..." he said. "Let's go then" he finished taking a step back. "I actually found that planet with the beaches." he said referring to the conversation that had taken place two decades prior. Maybe she didn't remember it, but he remembered everything about that day. "Not a soul to be found as far as I could tell, well..." he paused "...if you don't count the myriads of animals tried to eat me while I was there...I'm sure its fine"