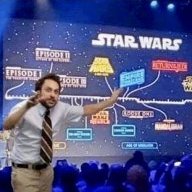 I have an opinion.

"Decay is inevitable... your defiance, insulting."

The Knights of Ren have need for being both intimidating and mysterious. The mask serves them in this way, and as a symbol of their new identity in service to the all consuming Ren. Dr. Oossan Juntag spends his days researching terminal illnesses, but his true face is the mask of Carrion Ren. Both men dress in black, though Oosan is styled in sleek proffesional attire befitting his station. Carrion’s mask is shrouded in a wide cowl, and long fitted robes.

His bracer, sometimes worn by both persona, is unexceptional, mundane, and black, having the only additional, ubiquitous functions of a hidden computer spike, and datapad interface. The display settings even change color and format to support his dual identity. The voice scrambler is normally set to produce a gravelly whisper that is reminiscent of something otherworldly or undead.


LEGALITY
Illegal if recognized as a Knight of Ren mask
INTENT
A personal Knights of Ren Mask for Carrion Ren, with bracers for utility
ADVANCED TECH
NO. But this is a one of a kind set.