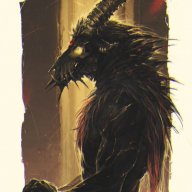 CASCADIAN RUINS, LOCAL TIME: 0623
Maelibus stood at the ruin steps for several moments, head tilted in an angle as if he was caught in absent minded thoughts. Golden eyes burned with a distinct sulfuric hue, staring at the forged stones and ancient power that hummed from the hollow grounds surrounding him. A path to the side would take him towards an open dirt field, likely used for walking or perhaps training grounds for the cultist' members. In the far reaches of Ryloth, these ruins were rarely visited but a few legionnaires and guardians alike had ventured to them in the past. It was rather early this morning, night sky not fully resolved as only shards of light were visible but otherwise everything surrounding them was still a fogginess of midnight blue.

He had arranged to meet another of the cultist, a Devoranium whom he had never been formally introduced however the devil-like warrior was well respected for his martial prowess and the ambitious Khaleesh hybrid wished to test his own abilities against the legionnaire. Maelibus was dressed as he usually always was, bare-chested with simple silk pants covering his lower extremities. He wore no armor on his upper body save for the traditional Khaleesh mask which was forged from a Maelibus skull, serving as his traditional racial artifact as well as only singular armored segment. Its molten gold surface contrasted with the Sith's own obsidian flesh, a mane of tawny brown hair descending from the helm to mid shoulder level.

Hands rested on the hilt of the golden war-hammer, his preferred weapon for most melees. Though as any true Sith, Maelibus' crimson lightsaber was strapped on his waist in case his opponent wished to engage in a more ruthless sparring competition. 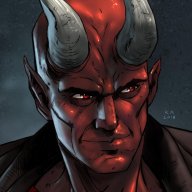 Myr had been surprised when the Kaleesh Legionnaire had sought him out for a duel. He hadn't thought he had any sort of reputation within the Sith Eternal, but he was nevertheless more than willing to give Maelibus what he sought. Watching crouched atop a spire that stood above the path that the masked warrior walked, he examined the man he was about to fight.

Myr's eyes moved from warrior's mask down to linger on his obsidian chest for a moment before eyeing the golden war-hammer the kaleesh held. He hoped the Legionnaire was as fearsome in the fight as he looked.

Leaping down from the spire, Myr landed gently on the rocky sand. "It's good to finally lay eyes on my opponent." He called out to his fellow Legionnaire. Standing with his feet spread, the devaronian was clothed not dissimilar to his opponent, bare-chested and wearing light black pants. He wore no armor but a horned helmet, not entirely comfortable revealing his full face to other's within the cult. He held his spear extended at his side, its spiked butt planted in the the sand. He too wore a lightsaber on his hip, and additionally carried a vibroblade sheathed at the small of his back. "Shall we begin?"

Maelibus turned his head slightly as his opponent landed on the rocky sand behind him, there was approximately 10 meters between them at this point which was a good starting distance for their duel. Golden eyes settled upon the Devaronian, nodding in acknowledgment at his statement. "Likewise.." The Khaleesh hybrid said, his voice surprisingly deeper than expected for those of his race however given the tawny mane of hair and the slightly larger and more athletic build, perhaps Myr could assume there was more than one racial purity within his adversary. It appeared that Myr had dressed similarly, causing perhaps just a little bit more respect to flow out of Maelibus towards his fellow legionnaire. He himself had always paraded himself in maintaining his physique in prime condition and rarely understood when others covered it in meaningless metal skins.

Sandy dirt ruffled underneath the weight of his feet, scattering away as Maelibus took his first steps towards the other Sith. Hands gripped into combat position along the shaft of the war-hammer while the Khaleesh studied the ornate spear that his opponent utilized. "Interesting...a relic from your homeworld?" He asked the Devaronian, the crimson weapon was certainly unique and likely helped distinguish the Legionnaire from lesser competitors.

Arriving close to 7-8 meters between them, Maelibus nodded to Myr's final question. "Certainly.." He said, concentration shifting towards the duel at hand. The force channeled through his body, granting him a fervor of focus and strength; The Maelibus was more of a brutal fighter, often using rage to augment his attacks. Though for now, he remained calm and almost liquid-like in posture, feet slowly moving as he circled around the Devaronian in search for an opening to attack.

Myr shifted into a combat position to match Maelibus', spear in a two-handed ready position, right hand holding just above the spiked pommel at cheek level, the left just below the middle of the spears haft in an underhand grip, the two meter long weapon was held with its razor sharp blade pointing directly at the kaleesh's eye, a sure threat should he approach too close. "Not a relic of any kind, just a bit of nostalgia." He chuckled as he remembered his many hunts through the jungles of his homeworld.

Circling, keeping pace with the kaleesh, Myr too opened himself to the force. It flooded into him, crashing upon him like the icy waves of Kef Bur. A feral grin spread beneath the open mouth of his helmet, fangs bared. With fanged hiss, Myr covered the distance between them with two fast steps. Left hand changing to a forward grip, Myr thrust at his foe with the spear, a lightning jab at the kaleesh's collarbone, powered with a slight chopping motion by his right. The blow retracted as quick as it struck, like a striking rylothian desert snake.

"Nostalgia is a hallmark of war, style is one of victory.." He said in response to Myr's statement, it was a saying which he had heard decades ago and simply thought it was interesting. Maelibus' eyes studied his opponent, attention flickering for a just a brief moment to the feet movement before bouncing back upwards towards the red fleshed torso. As Myr shot forwards to cover the gap, the Kaleesh used his own natural agility to strafe towards his own left. The move allowed him to dodge the attack, the spear slashing into the air where his right shoulder use to be.

With a quick step forwards, Kaleesh utilized Myr's own charge to further close the distance and thus permitting him to be in striking range with his hammer. Maelibus brought it up in a quick and easy opening attack, smashing it at Myr's exposed right flank as his opponent was simultaneously retracting the spear.