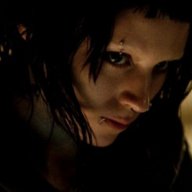 There was just heavy breathing as Sera started to return to her senses. It wasn't everyday she got shot and found out whether or not her armor could take a hit. Then again this wasn't a normal day in fact far from it. The man over her was well the epicenter for all of that. She could hear him bemoaning her stupidity, except it felt more like concern than anything.

"I... think I'm fine." She replied feeling a bit punch drunk. Though everything was quickly becoming more and more clear. She rubbed her eyes when he was done examining her chest and heard her jest. Chances are if she wasn't wearing armor whe would have been dead. Killed in an attempt to apprehend her, that would have been a fitting too. She did that for someone she didn't even know, hell a person who didn't have a face she could attach to their voice.

She slowly got up refinding her balance in the process and she looked at the state of the place. It was carnage one that would attract eyes and be really easy to trace back to them if someone decided to question for witnesses. She looked back at the Mando, that T-visor now being all the more entrancing and mysterious.

"Why? Why you'd do it? Most would have walked away or turned me in." As she asked she could feel the wind begin it's whistling song as it ebbed and flowed in intensity. Bits of her hair now beginning to turn solid while other strands danced in the wind. Her eyes though still remained on the Mandalorian. She was curious what she would hear from the faceless warrior. 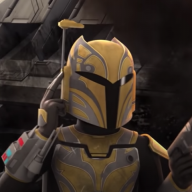 Song was relieved. Her noble deed, her little stint, hadn’t been for nothing. If she had been responsible for the young woman’s death, it would have left her crushed. The Mandalorian, for all the cold ruthlessness they were known for, still had a heart under all that armor. Then again, perhaps she should have taken the former slave to the ship in the first place, and free her from there, avoiding the whole mess in the first place.

The Barabel, who had since vanished in search of warmth, and the blood he left behind. The Quarren in the coat paralyzed in the snow outside. The masked man Song had beaten flat to the floor. She hoped that was all, and by the looks of the remaining patrons, who either had since fled the scene or were crouched underneath tables, she figured it was done. Song was done.

However, she blinked at the young woman as she asked her why. The real question was: why not?

There was much more to it than that. The fact that she despised the Syndicates, the slave rings, the criminals, also played a role into it. She in no way supported slavery, or forcing the will of others without choice or reason. It went against the very foundation of the Creed, against her brother’s own beliefs. It was not the way.

Song turned around to the wrecked outpost, the bounty hunters scattered about, then back to the young woman. “Are you going to stay here and wait for those guys to wake up, or do you need a ride off this rock?”

She extended a hand. The offer came indifferently, like she didn’t care what her answer might be, but a part of the Mando hoped she’d join her. Maybe to take her somewhere better, or safer. Anywhere better than where they were now.

Honor. She almost blinked in disbelief at that word. That was the first she think she ever heard that word seriously, not in an attempt to goad a response or to sleazily try to get things your way. The first time she ever heard the word honor used honestly. Was this what people had outside the outer rim? Was this what slaves imagined when the futile hope that someone would free them came up or even just that they would be treated like sentient beings and not mere Bantha poodoo? It was a like revelation to her. especially now that she was looking at someone who so far seemed to upheld that tenet from the get go.

She was briefly in a sense a shock at the thought and for him it must have been second nature to act on that... how funny... how curious. She was mulling it over as she wondered if there was a chance she would be able to learn what was honored. She was just so lost in thought. Though something did stick in her head. She didn't really know what honor meant or the finer details of acting with such a thing, but she did understand something: That it wasn't free for the Mando to do that. There was always a cost somehow especially given how cutthroat some lives can be. So well maybe she should find a way to pay him back, the old mantra of never be in debt to anyone playing in her mind. A idea began to form in her head.

Though the words of the Mandalorian would slam her back to reality and she realized she had been in thought and needed to get the feth out of here. It just caused a sudden chuckle to rise from the vagabond. An honest one that felt like it had been desperate to claw it's way out of her mouth for years now. She was feeling weird now, like she had a small cozy fire lit inside that warmed her to the core. She didn't know what this was but it was nice. She looked down at the mando's hand, it reminded her of an older memory of when she slummed the night with a rather odd woman. She too offered her hand to Sera, but she had turned it down. A same pan of pain now crossing over her mind as she thought it over. She wondered what Alana was up to, and was now kicking herself for turning down that hand. Not again this time would be different. She grabbed the outstretched and hand gave a firm hand shake that seemed to make her feel lighter already, as a massive weight felt uplifted.

"Right, a ride to somewhere warmer would be better than sitting around here. Actually um... I know, you're turning down... a lot... and that I don't have..." She was fumbling hard and was devolving into an awkward mess now. Frustrated in that a part of her felt like it knew exactly what it wanted to say but just couldn't find the right words until she just stopped herself and forced something out of her mouth.

"I want to work with you."The words stammered out as she finally committed to what she wanted to say. wondering what he would say as well as being slightly terrified of the potential answer.

Song lifted the young woman off the floor. A faint smile danced across her lips, even if nobody could see it. The Mandalorian, stoic and blank-faced as she seemed, was simply glad the chaos had simmered down. That the freed slave stayed free. By taking her away from the mess of the station, aboard her ship and far from the icy wasteland, she might find the young woman somewhere new to hide and rest. A place she could be safe. Never have to worry about the past crashing down in on her.

She laughed, softly, at her mention of a warmer planet. In her many travels, Song knew a few good places. Takodana might be a good start for her.

However, the Mandalorian’s contentment turned into confusion. Clearly, the woman wanted something more out of her. To free others like her? To find her family? She leaned in closer, expecting either question, but she was thrown for a loop at what she really wanted. Although it came out as a mangled stammer, it still took Song aback.

A partner? No, a foundling? The idea hit her like a bus, and her immediate answer was a “no.” A sharp-cut, no-nonsense no. Last thing she wanted was a permanent stowaway. Someone to look over her shoulder, or someone to have to teach and take care of constantly. Song already had enough on her plate: bounty hunting, finding her brother’s killer, proving her worth to Clan Wren. How would taking on a former slave with little skill help her?

No. She was wrong to think that. The young woman had given an incredible performance in their little bar fight. It was obvious she knew a thing or two about combat, and her speed and street smarts were remarkable for someone who hadn’t spent years training for it. Besides, the Mandalorian had met trouble too many times to count on her own. Bounty hunting was a complicated profession. Her most successful hunts hadn’t been completed alone, but with someone else.

Then, she thought back to her Clan. Her brother. There was no reason to turn the young woman away. The only negative was another mouth to feed, and Song was already set enough on credits.

The Mandalorian stared long and hard at the woman. Until, finally, she gave her answer, “Alright.” Two syllables. One word. That was all that she needed.

Song turned around and made for the open door. “I suppose that means introductions are in order, but you can call me River.” She tilted her head back over to her, expecting an answer in kind. If they were going to work together, Song was at least going to need a name to work with too.

A part of her was kicking herself that she couldn't explain things and that her mind was freezing up. Normal she just fended for herself, that was at the forefront of her mind at all times but it was all starting to feel hollow now. Underneath deep in her subconscious perhaps she wanted to serve something greater, and perhaps in doing so learn to help others like the Mandalorian helped her.

Though now her thoughts were purely on the feeling that she already karked things up as he paused that oh said everything to her. Usually that was what someone said when they really wanted to just say 'no' but felt the need to save face. Her heart already beginning to digest the implied rejection. Her head drooping down ever so slightly, only to perk right back up upon hearing his answer. Feeling partially electrified by his answer.

"Oh.... uh... thank you." She replied and as she looked off to the door that would lead to a new chapter of her life beginning. As she heard River ask for a name.