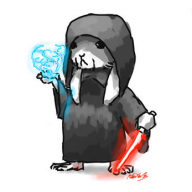 ​
LOYAL TO THE END

"I'm honored to serve the Empire; the last true bastion of peace, justice, and security throughout the entirety of the galaxy. My father before me served the Republic as a Fleet Commander in the 117th, and he died the day the Jedi turned against us and attempted to seize control of the senate. I know what's at stake, and I will not fail the Empire."

- Captain Amee Noon, 4 ABY
(Three Hours before the Battle of Endor)​
​
DISCLAIMER: (Some words below have hidden descriptors, so hover over them!)

Amee Noon was once a proud Imperial Captain within the ranks of the First Galactic Empire, who, after enlisting at the Imperial Flight Academy on Kuat, graduated at the surprisingly young age of 16 and went on to become an unremarkable Tie-Fighter pilot for the next four years. It wasn't until a conflict with the Alliance to Restore the Republic over Kuat that she discovered a natural aptitude for command, and was quickly acknowledge by her superiors and shuttled off to Uyter for officer training.

After two years of at the academy and over four in active combat with the Rebel Alliance, Amee eventually earned command over her own starship, the ISD Blacktree and was present at the frontlines of the Battle of Endor, serving valiantly and effectively until the destruction of the Executor brought mass panic and disarray to the Imperial Fleet facing off against the Alliance.

With no other choice but to flee as the Death Star II went critical and amidst a general retreat, the ISD Blacktree went into hyperspace at the exact moment of the Death Star's destruction.

The Blacktree never arrived at its intended destination.

Officially, the Blacktree and all aboard were marked as casualties as a result of the Death Star II's detonation and the loss over Endor. However, unbeknownst to the Empire at the time, the Blacktree had not been destroyed but had been driven into an alternate dimension. Somehow, as it entered hyperspace, a burst of raw dark side energy struck the ship, destroying its hyperdrive and shunting the barely operative vessel into an alternate dimension. Though there persist no records of what occurred in this paranormal plane, it forever changed Amee Noon and the Blacktree.


THE MIND OF A HYPERSPACE HORROR
Amee Noon is no longer the honorable and steadfast Captain of old. Where there was once a mind of logic and reason now rests one driven by an unknowable and insatiable lust for the force and those who manipulate it. Amee Noon does not speak verbally, and instead communicates through the force, instilling sensations and emotions on others that often hint and describe how she feels about one subject or another. Amee arrogantly (and perhaps righteously) considers herself a Force of Nature and often seeks out force users, and even regular force-sensitive denizens of the galaxy, seeing them as a source of nourishment; little more than prey to be drained of their life and spirit.


A NEW SKIN OF SHADOW

Noon possesses no belongings with the exception of her ship and the clothing she wore when the hyperspace accident occurred. As she was mutated by exposure to the raw, dark side energies of the force that knocked them off-course, her imperial outfit was melded into her flesh and is as a second skin. Over time, as others aboard her ship were hunted down and flayed for nourishment, she has added patches and strips of their uniforms to her own body, finishing a grotesque and shadow-stained skirt and cape of darkness that shrouds her shoulders and hips.

When it comes to the constant veil of shadow that covers most of her body and a good portion of the right side of her face, it is a trick of the force, as Amee Noon is constantly bending the light around herself to conceal her more malformed features: Most of the skin on the right side of her face is missing, revealing elongated growths of bone and muscle with a maw full of sharp fangs and a serpentine black tongue that is constantly in motion within the confines of her sickly black mouth.

Noon's hands and feet also end in a sickly design, where flesh has given way to malformed growths of nail and bone that form wicked claws on the end of each finger and toe.


BEYOND THE DARK SIDE


Noon possesses other force abilities that most Sith and Jedi learn, such as Force Body, Speed, Lightning, etc, and can utilize them effectively. The above are simply the most difficult (and perhaps often used) by Noon.

​
With no crew, most of its Tie-Fighter and Bomber compliment missing, half of its ordinance depleted, and no functioning engines visible to the naked eye, it is a curiosity as to how this vessel is capable of interstellar flight let alone hyperspace travel.

From the tip of its dagger-shaped nose to its broad backside of mostly destroyed ion engines, the entirety of the Blacktree's structure is compromised and looks as if it is falling apart, with a constant cloud of its own debris shrouding it at every turn, pulled into orbit by an anomalous gravitational field surrounding the vessel.

Despite its appearance and lack of internal lighting, the vessel itself seemingly has a stable (if not stagnant) oxygen environment, and the hyperdrive, though badly damaged and leaking high volumes of dangerous radiation and gases, has been jury-rigged to function. None of the computers, however, appear to function onboard the vessel itself with the exception of an addition to the ship's computer core.

Inside, the corpses of the Blacktree's original crew still decorate the halls, barely little more than old bones in dusty uniforms, and many have been suspended in various wires, cables, and metal constructs as if made to act as wards and fetishes for some unknowable religion. All the droids the formerly moved about the vessel have all been scrapped and merged together to act as the ship's new central computer in a horrendous display of mechanical horror, and it is through this abomination of technology that the ship is controlled, with Noon's direct occasional input.

Much of the ship is ridden with odd anomalies, such as time-displacements, after-images of the crew before and after the hyperspace accident, and even reality-altering moments, such as entire corridors rearranging themselves or doors leading to locations they are already within.

The dark side permeates this vessel to the core, making it out to those sensitive to the force, as a living being. Though not truly alive, there is a constant sense of agony and an aura of despair radiating off the vessel itself, likely due to the massive loss of life and extradimensional, anomalous properties now imbued within the Blacktree.